Brickipedia
Register
Don't have an account?
Sign In
Advertisement
in: Class 2 articles, Pages that link to Legopedia (Russian), Minifigures introduced in 2008,
and 4 more
English

"Ahsoka Tano... Hm. I fought by her side from the Battle of Christophsis to the Siege of Mandalore... and a friend of her's is a friend of mine."
―Captain Rex in Star Wars Rebels: The Lost Commanders

Captain Rex has the standard Clone Trooper leg piece- white legs with a black leg joint, and also has the same printing design on the torso piece as most Clone Troopers in The Clone Wars subtheme, however the arms are blue instead of white. Rex's headpiece is unique with five o'clock shadow and a scar under his lower lip in addition to the standard The Clone Wars Clone Trooper face print. Captain Rex wears a white clone trooper helmet, with blue stripes above the visor and one stripe running vertically across the faceplate. Also printed are blue lines near the top of the helmet, resembling jaig eyes, an award earned by Rex in the Star Wars universe, along with grey printing at the bottom of the helmet's crest, yellow dashes above the visor, and the standard clone helmet printing. Rex comes equipped with two grey Commando pistols, a grey pauldron and kama, a grey rangefinder, which can also be switched for a visor or floodlights.

In 2013, Rex was redesigned, and is based on his Phase II armour. His helmet is a new mould, larger than his old one. It has two large, tube-like breath filters at its base and the crest on top is rounded instead of straight. The visor printing is similar to his old helmet's, with the T-visor lined with blue and Jaig eyes above it. Two brown lines, one on each side, run from his visor to the base of the helmet. Tally marks are present on the sides of his helmet.

Rex's new pauldron is made of cloth. It's black with several large blue printings covering his left shoulder. The top of his torso has printing of the pauldron underneath where the cloth piece lies. It has three ammo cartridges on the dirt-spattered armour as well. The back has a belt with a cylindrical thermal detonator printed on along with a rectangular panel with several dots and lines inside. Grime printing is also present here. Rex has blue arms and black hands. He has the same head as his Phase I minifigure but with some minor changes.

The kama is also cloth, this one black and unprinted. It is identical to the ARC trooper battle pack released in 2012. His hips are black and the legs white with printing of blue kneepads and tally marks.

Age of the Empire variant

In 2016, Captain Rex returned into the Star Wars universe in the Star Wars: Rebels T.V. series, and with this, Rex was also given a new design with a new LEGO minifigure showing his older self, with most of his blue 501st markings on his armor faded away. There was also dirt and grime added on his chestplate and had standard grey LEGO legs.

Captain Rex appeared as a playable character in the video game LEGO Star Wars III: The Clone Wars. Rex's appearance in the game is much like his physical minifigure's, and is armed with two commando pistols. Rex has the ability to single jump, throw EMP grenades and plant bombs in specified Clone Trooper areas. Captain Rex can also command squads of Clone Troopers on battlefields, and in some dark areas, he automatically lights up areas with floodlights that he attaches to his helmet.

CC-7567, nicknamed Rex, was a Clone Trooper Captain (later Commander) in the Grand Army of the Republic. Throughout the Clone Wars, Rex was in command of Torrent Company, a unit within the 501st Legion. At some point, Rex was awarded the Jaig Eyes, a battle honour given to him by Mandalorians who trained clone officers during the Clone Wars. Rex worked closely with Jedi General Anakin Skywalker and Jedi Commander Ahsoka Tano, both of whom he assisted on several missions including battles on Christophsis, Orto Plutonia, Umbara, Ryloth, Teth, Geonosis and Lola Sayu.

He was also known to work with Clone Marshal Commander Cody on many occasions since Skywalker also commonly worked with High General Obi-Wan Kenobi. He fought with the Republic until late into the war, when clone trooper Tup's inhibitor chip activated prematurely and Tup executed Order 66, killing a Jedi General. Tup was transported to a medical station along with ARC Trooper Fives, who escorted him. Tup died, and Fives found the inhibitor chip in his brain, removing it. Fives was killed by Commander Fox while trying to tell Rex and Anakin Skywalker the truth about Chancellor Palpatine.

Rex, who had been close friends with Fives, became disillusioned with the Republic, removing his inhibitor chip along with Clone Commando Gregor and Commander Wolffe, the three clones subsequently retiring from the Republic and living on the planet Seelos in an AT-TE. He was replaced in the Army by Seargeant Appo. He was later found by Kanan Jarrus' crew with help from Ahsoka, and eventually joined the Rebellion, notably befriending both Kanan and Garazeb Orrelios. 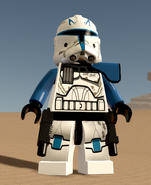