Captain Soto is a Minifigure, who is exclusive to 70591 Kryptarium Prison Breakout released in August 2016. Captain Soto was the original owner of the Destiny's Bounty and the leader of his pirate crew in Ninjago: Masters of Spinjitzu.

200 years before the episode Pirates vs. Ninja, Captain Soto sailed on the Destiny's Bounty with his crew. He carried a log book with him and wrote about a fabeled Dark Island. While he had left, the pirates had a party and had No Eyed Pete steer the ship. Due to the fact that Pete was blind, he crashed the ship into the cliffs of Ninjago, drowning everyone on the ship.

Years later, Lord Garmadon found the ruins Destiny's Bounty and used the power of the Golden Weapons of Spinjitzu to repair the ship. While riding on it, Garmadon saw the Ultra Dragon and tried to destroy it with the Mega Weapon. He failed and blamed it on his army. He went inside the keep of the ship and threw a fit. Lord Garmadon, then found Captain Soto's logbook and wished that the Pirates were there to help him and slap some sense into the Serpentine. While he said this, Mega Weapon drained Garmadon's power and brought them back.

When Garmadon returned, he saw the Serpentine and the pirates arguing. When he commanded the pirates to work for him, Captain Soto and the other disobeyed him. Since the Mega Weapon drained Garmadon's power, the pirates threw both Garmadon and the Serpentine into the brig. Captain Soto discovered the changes that the ninja had made to the ship, and he went to Ninjago City on a raid. He shot a few buildings and told his men they can have whatever they want. Afterwards, the Brown Ninja treatend to attack the pirates. Captain Soto cut his shirt and laughed. He told his men to be aware of more "pyjama men". The Ninja planned to dress up as pirates to get in the Black Bounty. The pirates decided to make Dareth walk the plant. However, the Ultra Dragon rescued him.

Ambushed by the Ninja

Soon, the Ninja took off their costumes and battled the pirates. First, Cole cut a feather off Captain Soto's head with his scythe. Then, Zane used two smoke bombs to prevent the pirates from seeing, and shot his ninja stars at him, trapping him into the pole. Later, Jay broke a gumball machine with his nunchucks, tripping everyone (including the Ninja) except Captain Soto. Then, Lloyd came, hanging on a rope, yelling, "NINJA-GO!" He fell on Kai and Soto. Captain Soto and Kai recovered continued fighting. Soto yelled, "PIRATE-GO!" Kai informed Lloyd that he isn't supposed to fight, and threw him in a barrel. The barrel rolled, knocking Kai off the ship. Lloyd then battled Soto. When he attacked him, Lloyd jumped the other way. Lloyd tried to do Spinjitzu inside the barrel. He was successful, but then Soto kicked him to the other side of the ship. The Ninja surrounded him and Lloyd shot an energy ball, but it was unstable, and broke the sails off. The pole fell on the Ninja, and Captain Soto's crew surrounded them. Captain Soto threatened to make the Ninja walk the plank. However, Samurai X came and rescued the Ninja. The pirates lost and were sent to jail by the police, which then allowed Garmadon and the Serpentine to reclaim the Destiny's Bounty.

In the 17th episode, "Ninjaball Run", they somehow broke out of jail and entered the Ninjaball Run Road Race. However, they were the first to be disqualified after being rammed into the entrance of the chasm by Darkley's Boarding School's students in their bus.

Chen has his peg leg in his museum; according to the Ninjago website, he obtained it after a battle between his cult and Soto's crew.

He is seen in "The Greatest Fear of All", in the Kryptarium Prison, saying 'Hey! it's the pyjama man!'

In Enkrypted, Soto encounters the Ninja after they are framed by Nadakhan and imprisoned in Kryptarium; he encounters Nya unmasked for the first time and notes that she seems familiar. Soto then reveals that he had encountered and defeated Nadakhan and his crew in the past, and offered to share the secret with the ninja in exchange for their help in breaking out. Reluctantly the ninja agreed, and after breaking out with Soto in tow learned that he had used venom of the Tiger Widow of Tiger Widow Island -a poison fatal to a human- to weaken the Djinn long enough to imprison him. He also reveals that the only map to the island is aboard Nadakhan's ship, the Misfortune's Keep, and just prior to parting ways with the ninja realizes where he's seen Nya's face before: she is the spitting image of Nadkhan's lost love Dilara.

In Operation Land Ho!, Soto is recruited by Jay alongside various others in a last ditch effort to defeat Nadakhan. The events of Nadakhan's escape are later negated as a result of the conclusion of The Way Back; as such, Nadakhan remains trapped in the Teapot of Tyrahn and Soto is presumably returned to Kryptarium. 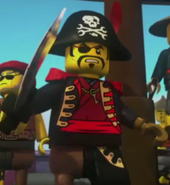