With and without chestplate

Captain Valiant,[1][2] also known as the Conquistador,[3] is an Imperial Armada minifigure introduced in 1996.

Captain Valiant has a dark green shirt with white pants. His torso is decorated with white frills, a white cravat, a black belt with buckle, and a golden medal. He wears a black Morion Helmet with a white plume. His unique face is decorated with black eyebrows, mustache, and goatee. He is sometimes depicted wearing a metalized silver breastplate.

In LEGO Battles and LEGO Legacy: Heroes Unboxed, Captain Valiant is depicted as wearing white gloves, although this is not seen in any official sets.

Captain Valiant makes a cameo appearance in LEGO Chess, seen aboard the Armada Flagship during two of the FMV cutscenes in the game's Pirates story mode.

In LEGO Legacy: Heroes Unboxed, Captain Valiant is an Explorer tank with the abilities "Cutting Riposte", "Thbbtt!", "Rousing Screech", and "I Am Rubber". He is characterized as flamboyant, using insults and taunts to demoralize the enemy while also boosting his own team's morale. 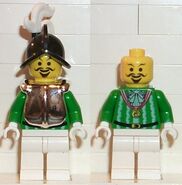 An unofficial photo of Valiant with white gloves, which likely influenced his appearance in video games

Captain Valiant as the Conquistador in LEGO Battles

Valiant and other Pirate heroes in LEGO Legacy: Heroes Unboxed

Retrieved from "https://brickipedia.fandom.com/wiki/Captain_Valiant?oldid=2046990"
Community content is available under CC-BY-SA unless otherwise noted.
... more about "Captain Valiant"
RDF feed
Appearances
6280 Armada Flagship
6204 Buccaneers
6281 Pirates Perilous Pitfall
6291 Armada Flagship +
ArticleRating
unrated +
Image
Captain Valiant Without Armor.png +
Img1
Captain Valiant Without Armor.png +
Img2
6281 Captain Valiant.png +
InfoboxTemplate
Minifigure +
ShopDescription
A flamboyant tank who hurls both attacks a … A flamboyant tank who hurls both attacks and insults to keep up team morale. Between his rapier wit and his actual rapier, it's hard for his enemies to say which hurts more.Trivia<br/>Keeping spirits high on a long voyage can be an imposing task, but it's even harder to do when you're kind of a jerk. As Captain of the imperial armada's flagship, the Santa Cruz, Valiant's main goal isn't just to bring justice to the high seas; it's also to sling as many slick burns as he can along the way.Opening Act<br/>Debuted in 1996.Set Sail<br/>Appeared in 4 sets.Ship Talker<br/>Was a part of the Imperial Armada subtheme.Thick Skin<br/>Only wore his signature breastplate in the "Pirates Perilous Pitfall" set.Big Head<br/>Has unique head and torso pieces.ead
Has unique head and torso pieces. +
Theme
Pirates +
Title
Captain Valiant +
Txt1
Without armor +
Txt2
Armored +
Variations
With and without chestplate +
Years
1996-1997
2001 +