Cara Dune is a Star Wars minifigure first released in 2019.

Cara Dune was a human female who served as a shock trooper in the Alliance to Restore the Republic during the Galactic Civil War. Born on Alderaan, its destruction by the Galactic Empire served to embroil her into fighting the Empire all the way up to after the Battle of Endor, where she was assigned the task of hunting down the remnants of Imperial officers and commanders that had rebranded themselves as Warlords. When the New Republic formed following the apparent disappearance of these Imperial warlords, Cara would end up breaking away while retaining her training as a seasoned warrior to instead operate as a mercenary, enough to earn several arrest warrants on her by the New Republic or by other factions.

When The Mandalorian met her while she was hiding out on a backwater world of Sorgan, she believed that he was sent to try collecting a potential bounty on her head, only to learn that he too was in hiding from Bounty Hunters that were seeking him and The Child that was wanted by Imperial Remnants.

Several weeks later, The Mandalorian would go out of his way to recruit Cara Dune to take the fight back to the Imperial Remnants who had taken over the town of Nevarro and that the authoritative head of Nevarro and The Mandalorians' handler in the Bounty Hunters' Guild Greef Karga had promised to clear the bounty placed on The Mandalorians' head in-exchange for clearing out the Imperials from his town. After doing so, Cara Dune asked for the bounty on her head removed as she became Nevarros' new Marshal in protecting the peace of the town. 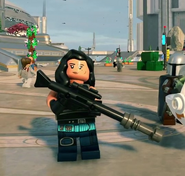