Cargo is a subtheme of the City theme first introduced in 2007. It encompasses both cargo transportation and post office, with several sets for each having been released. It continued into 2008 and was reintroduced in the summer of 2013.

The theme consists mainly of vehicles used to transport cargo and mail, though, occasionally, such as in 60022 Cargo Terminal, a small structure related to transportation may be included. Excluding 7994 LEGO City Harbour, the sets are divided between those that are post office orientated and cargo orientated. The post office vehicles, of which there have only been two so far, are mainly yellow and with red highlights and translucent-blue windshields. Both of these vehicles are fairly small, bear the post office insignia (a plain white envelope), and are driven or piloted by postmen in red uniforms, which also bear the insignia. The cargo vehicles are mainly white and green with clear windshields, and they bear the cargo insignia, a globe with a yellow package in front and arrows circling the globe from either side of the package. The colour of the globe and the arrows has varied over the years. The globe was blue with the release of the 2007-2008 sets, and green with the release of the 2013 sets, and the arrows were yellow in certain sets and red elsewhere.

The Cargo subtheme of City was first introduced in 2007 with two sets, a container stacker and a harbour. In the following year, two more cargo sets, a truck and forklift and a cargo plane were released, along with two post office sets, a mail van and a small plane. The post office sets are the only ones of their kind so far, contrary to most of the other Cargo sets, they were notable for bearing a yellow colourscheme. After the release of these sets, the theme appeared to have been discontinued, but it will be brought back in the summer of 2013. The sets released at this point in time will follow the same colourscheme and will consist of a cargo truck, a cargo heliplane, and a cargo terminal, with a cargo plane similar to 7734 Cargo Plane being included with the cargo terminal. These sets, along with the subsequent Coast Guard sets, will introduce a new cockpit mould, as well has minifigure hats that allow headphones to be attached. These headphones are also a new mould to be introduced in the 2013 wave of Cargo sets. A Cargo Logo can also be seen on set 5983 Undercover Cruiser.

The logo for the 2008 sets, featuring a blue globe and red arrows.

A logo featuring a blue globe and yellow arrows. 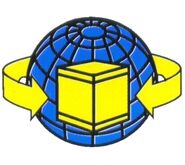 Retrieved from "https://brickipedia.fandom.com/wiki/Cargo?oldid=1984666"
Community content is available under CC-BY-SA unless otherwise noted.