Carnage is a villainous hybrid of two evil beings.

Carnage's human half is Cletus Kasady, a murderer who was born in the Ravenscroft Mental-Institute to an unwell mother. As a child he proved himself to be evil and violent, growing up to be a deranged criminal who was imprisoned in the very institute where he was born.

Cletus became cellmates with Eddie Brock, one-half of Venom. When Eddie's alien symbiote came to break him out, it left behind its red offspring which bonded to Cletus. While the Venom symbiote was bonded by connecting to its host's hatred, the new symbiote bonded by its host's bloodlust.

The bond between Cletus and the symbiote became so great that the two were inseparable, identifying as a single entity in the form of Carnage. Carnage would use its great power for the love of violence and anarchy, committing acts of meaningless violence. In addition to this, Carnage could generate long tendrils and turn its limbs into sharp weapons at command.

Carnage was one of the inmates that had broken out of Ryker's during the super villain breakout. 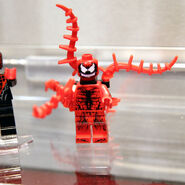 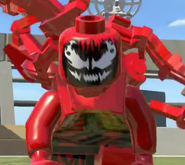