The Carnotaurus is a dinosaur figure which first appeared in 2018 in a Jurassic World set.

Carnotaurus (kahrn-uh-TAWR-us)  ("meat-eating bull"), was one of the most bizarre yet dangerous meat-eating dinosaurs ever found. Its skull was short, with spiked armor on the top and a pair of knobby horns over its small eyes. The neck and shoulder blades were well developed, but the arms were incredibly short, with forearms so shrunken they were practically just wrists; not even Tyrannosaurus rex had such small arms.

In the Jurassic Park Franchise

At one point, Carnotaurus DNA was used by Dr. Henry Wu in the creation of the Indominus rex. However, it is not known if there were live Carnotaurus' in the Jurassic World park.

It is revealed that there are surviving Carnotaurus populations remaining on Isla Nublar, but will now face an impending danger, alongside many other creatures, in the form of an erupting volcano. As Owen Grady, Claire Dearing, and Franklin Webb attempt to flee the erupting volcano, a Carnotaurus attempts to attack them, but is distracted by a Sinoceratops and starts fighting it. At least one Carnotaurus is captured by Eli Mills and brought to Lockwood Manor to be auctioned, but it is freed and joins Rexy the Tyrannosaurus in ripping apart Eli Mills, before running off.

Eye of Carnotaurus from LEGO.com 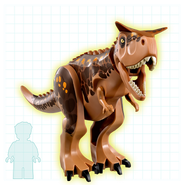 A Carnotaurus with a Baryonyx and a Stygimoloch.

A Carnotaurus with Sinjin Prescott