This article is about the Castle subtheme that lasted from 2013 to 2014. For other uses, see Castle (disambiguation).

Castle is a theme that was introduced in 2013, succeeding Kingdoms. It featured blue King's Knights battling red red Dragon Soldiers, and combined some historical and fantastical aspects of its predecessors: Kingdoms and Castle (2007). It was discontinued in 2015 and replaced by Nexo Knights in 2016.

Similarly to previous castle themes, the blue and gold lion kingdom, led by the heroic King, seems to be the heroic side, as well as the defending kingdom. Most of their set are defensive items such as towers. The black and red Dragon Soldiers, led by the Dragon Wizard, are the rebelling or attacking faction and seem to be portrayed as the antagonists. Most Dragon army items are attack vehicles, such as catapult wagons. Unlike their enemies, the Dragon Soldiers are more fantasy based, as not only is the dragon their namesake (as in the Kingdoms theme), but they also have a Dragon in their control. Both sides are similar to the sides seen in the Kingdoms theme, albeit with different coloring.

On the official website for the theme, it included five games for the five main sets released in the theme, and the games were titled the same as the sets. After the theme was discontinued, LEGO deleted everything on the theme's site, and replaced it with a message saying that the Knights were "retiring." 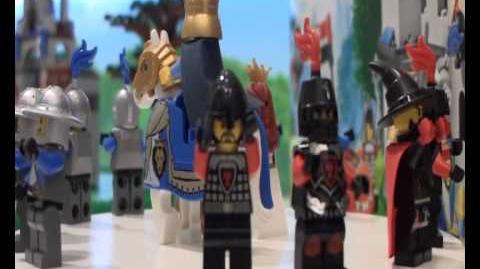