Castle Battle: The Game is a Castle (2007) online game. In this online game, the player chooses to ally themselves with the Crown Knights or Skeleton Warriors and defend the respective side's main residence from attacking forces.

The game consists of the player's catapult, the player's castle and the Skeleton Warriors. The skeletons charge the player's castle from a distance. Players must defend their castle with the catapult by dragging objects to the catapult and using the mouse to launch the objects. Dragging the mouse back increases the firing power, and moving the mouse up and down changes the trajectory. Boulders and soldiers are the main forms of ammunition, but certain levels also provide other objects, such as swords or knights, which have additional abilities. There is only a finite number of boulders or weapons to launch, so players must carefully aim their shots and fire at the right trajectory. If the enemy reaches the castle they will begin to attack its walls. Sometimes the enemy will throw objects at the castle. If the castle is destroyed, the player loses the game.

In the initial cutscene, the Evil Wizard orders his Skeleton Army to attack the Crown King's castle, and the King's forces leap to the defenses. If the player loses, the King's castle is shown in ruins and the King is disheartened, but upon finding his golden broadsword, he regains hope, and leads his army against the Wizard once again. If the player wins, the skeleton warriors are shown retreating as the Knights bombard them with attacks, and the King stands triumphantly.

In the initial cutscene, the Evil Wizard is shown to have captured the Crown Princess and imprisoned her in his Tower's cage. The Crown Knights advance to rescue the princess, and the Wizard orders his skeleton legions to defend the tower. If the player loses, the Wizard is shown looking at his destroyed force, though he regains hope when his dragon drops his staff towards him. If the player wins, the Crown Knights are shown running away from the Evil Wizard's tower, and the Crown King drops his sword. The Evil Wizard then takes the sword and puts a large storm over the Crown Kingdom.

The map above the screen

An example of a wrecked castle

A coming soon poster for the game

A boulder hitting a skeleton

A boulder hitting a knight 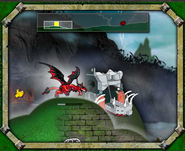 Skeleton Tower almost destroyed
Add a photo to this gallery
Retrieved from "https://brickipedia.fandom.com/wiki/Castle_Battle:_The_Game?oldid=1854196"
Community content is available under CC-BY-SA unless otherwise noted.