This article is about the animal. For the wood toys, see Wooden LEGO Cat or LEGO Cat (Large).

Cats are Animals that have been represented in numerous ways in various LEGO themes.

The earliest cats seen in LEGO were the human-like animal characters of Fabuland. The two of them have cat’s head.

The cat piece seen in regular LEGO sets is posed in a crouching position and can come in a variety of colours and, occasionally, print patterns.

The Belville has its own, larger cat piece to match the larger Belville figures. This creature is posed standing up with elevated head and bent tail. This smooth and realistic design again comes in a variety of colours and patterns.

Friends introduced two new cat moulds so far (also without movable parts). The first model covering two-stud space is in stretching position, a bit like a Lego system cat, but slightly bigger. It has curved tail and its head is turned to the left. Creature's front paws are joined as well as hind pair. It has printed eyes, nose and mouth, sometimes also fur pattern. Some accessories like a bow or a crown can be attached to its head. This mould comes in two colour variations: white and light blueish gray with printed stripes. This design is represented by two Olivia's pet cats: Maxie and Kitty. The second model is a single-stud mould in sitting position. This cat appears in two colour variations: black and white. In 2014 the sitting black cat will be also used in one of the Disney Princess sets.

In 2013 a new model of a standing cat was introduced in Minifigures (theme). The gray cat is a Grandma's companion. The creature is standing with straight paws and elevated head. Its front paws are joined as well as hind pair, the triangle ears are upright and the tail is double bent, forming "S" shape. Cat's body is dark blueish gray with a light blueish gray ears and patches of fur of the same colour on its chest and around the snouth. It has light pink nose. The animal's mouth is indicated by black contour printing. Eyes are round and black with smaller off-centre white dots. It appears to be looking up expectantly. In size and proportions this mould is similar to Lego system dog but the pose and detailed head sculpting resembles also the Belville standing cat. The new colour variation of this mould appeared in 2014 in 71004 The LEGO Movie Series, with a ginger cat accompanying Mrs. Scratchen-Post. Another modification of this mold, with a mohawk and spiked collar, appeared as part of 71023 The LEGO Movie 2 Collectible Minifigures as Scarfield.

Regular LEGO sets feature a crouching cat which is to scale with a regular minifigure, though it has appeared alongside the larger cat as a kitten.

The standing cat is also designed to accompany regular minifigures, although it is much bigger than its predestor.

DUPLO cats came in a variety of shapes and styles. 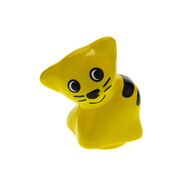 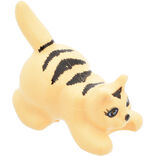 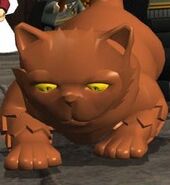 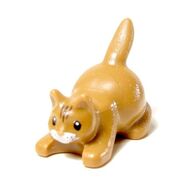 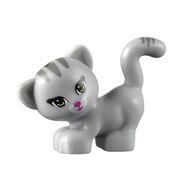