Catwoman, also known as The Cat or Selina Kyle, is a Batman minifigure introduced in 2006. She was re-released in 2012 as part of the Super Heroes theme.

There have been two Catwoman minifigures since the first released in 2006.

The first Catwoman minifigure had a Black Cat cowl which remains exclusive and is slightly different from the one released in 2012. Her face was coloured Light Nougat and was double sided with a sassy expression and red lips. The other side has the same expression, but a silver visor is over Catwoman's eyes to give them a comic-book look when her cowl is on. Catwoman's torso is black and has purple lines to give her a feminine shape, and a grey line to depict a zipper line which extends from her neck to her darker grey belt just above her waist. At the top of the zipper line is an O shaped zipper. Catwoman's legs are black and have no print.

The second Catwoman minifigure has a similar cowl, but with the eyeholes closer together, a redesigned face with white goggles on one side and a slightly open mouth with purple lips and a smirking face with normal eyes on the other side, an updated torso which is similar to the original, but added details to her zipper and belt, she has different feminine curves added to the sides of her torso. Unlike her original variation, Catwoman now has back printing. The pattern on the back of her torso is a continuation of her belt and lines depicting her shoulder blades. Her legs are still black.

Like all of the figures in the line, Micro Catwoman has short legs and a more cartoonish appearance. Her head is black to represent a full mask, with some flesh printing for the lower face and some goggles. Her expression is similar to the grin of the 2012 variant. Her torso is a simplified version of the previous Catwoman's, with the main difference being the cat's head on the belt buckle.

This variant of Catwoman is based on Julie Newmar's portrayal from the 1966 Batman television series. Her hair is the same as the Tiger Woman's, but in reddish brown with black ears. One side of her face shows Catwoman with a determined grin, and the other shows her wearing a domino mask and having a larger grin. Her torso shows a bit of skin at the neckline, and represents her catsuit outfit, with a basic design, a golden belt with a lattice pattern and a sun-like emblem, and some sequins. Catwoman's golden medal on a chain is also printed on her torso, along with some curves.

Her portrayal in The Lego Batman Movie resembles her New 52 portrayal from Lego Batman 3: Beyond Gotham, but with a few minor differences. Her suit is now purple, her belt is now a separate, dark purple mold, her goggles are chartreuse with white pupils and her skin is now tanned.

Catwoman had two variations in LEGO Batman: The Videogame.

In LEGO Batman: The Videogame, Catwoman is identical to her appearance in 7779 The Batman Dragster: Catwoman Pursuit, except her eyes are always comic-book styled and White, rather than silver.

Catwoman was also one of the few characters in the video game to have two variations. Her second variation was known as Catwoman (Classic). It was very similar to the normal variation, except for the black and purple were inverted on the cowl, torso, arms, and hips. Three minor changes were that Catwoman now had black boots, a line representing her naval was added, and her belt and zipper were removed. This variation, as well as an unmasked Selina Kyle, were available in the Villain Hunt on Nintendo DS versions of the game.

Catwoman has the ability to double jump and bypass security on certain doors armed by guards. She is also armed with her Bull Whip, which she can use to attack enemies, and draw them in for a deadly kiss.

Catwoman appears in LEGO Batman 2: DC Super Heroes. She has her updated appearance from 6858 Catwoman Catcycle City Chase, with her face showing the side with the goggles. However, her whip is coloured black rather than brown.

Catwoman is still able to double-jump and use her whip, but is now also capable of using acrobatics to jump onto and swing on outcropping poles, an ability introduced in LEGO Pirates of the Caribbean: The Video Game.

On the 3DS, she, like Mr. Zsasz and Batman's Sensor Suit, has the stealth ability.

Catwoman has three variants, two of them were based on her appearance in the New 52 comics and the 1966 Batman TV show. The Pre-52 variant recycles her LEGO Batman 2 variant.

The second outfit from the New 52 comics includes Catwoman wearing her zipped up leather catsuit and goggles.

Her 1966 Batman version compromises a catsuit with a mask and a matching golden belt and necklace. Unlike her appearance in the comics, Catwoman's hair is worn down which also has ears.

Having had a very difficult childhood, Selina Kyle learned various thievery skills and became a skilled burglar. One day she survived a fall off a building and landed in an alley where the local alley cats seemed attracted to her, this inspired her to take on the alias Catwoman. In her public life, she is a wealthy socialite living off the loot she has stolen. As Catwoman, Selina seeks thrills in stealing various artifacts and treasures and taking her ill-gotten spoils to her socialite life. She is a skilled gymnast and martial artist, and wields gloved claws as well as a whip. Catwoman is not directly against Batman as she sometimes allies with him in his crime fighting. But her thieving ways are what keep her from being fully fledged crime fighter.

In LEGO Batman: The Videogame, Catwoman was a boss on the level There She Goes Again and fought alongside The Penguin in Penguin's Lair. She was also a playable character in Stealing the Show and Arctic World.

Catwoman was an important part of The Penguin's team, which also consisted of Bane, Killer Croc, and Man-Bat. The team planned to unleash an army of Penguin Minions on Gotham City.

When Isis returned to her master and gave her the Gotham Diamond, Catwoman Petting Isis a Nice Kitty made contact with the Penguin, who infiltrated the Police Department, with assistance from Killer Croc, and helped her to escape. Penguin once again requested the diamond, but Catwoman again refused, at least until Killer Croc gave Penguin his support. Batman and Robin then arrived, at which Catwoman and Penguin ran, but Killer Croc stayed to give them cover in their escape.

Penguin and Catwoman retreated to the City Zoo where they were planning on staging the final phase of their plan. When Batman and Robin arrived at the zoo, Catwoman and Penguin fled to the Arctic habitat of the zoo, where they were hoping to execute the last stage of their scheme. When Batman and Robin arrived, Catwoman fought alongside Penguin and the Freeze Girls, but was defeated and sent back to Arkham Asylum.

Catwoman is one of the villains freed from their cells at Arkham Asylum when Lex Luthor rescues The Joker. She along with The Penguin, Bane, Poison Ivy, Two-Face, The Riddler, and Harley Quinn attempt to escape using their vehicles. Catwoman on her motorcycle was the first one Batman and Robin tried to stop when they arrived. She was stopped, but escaped shortly after with more inmates. In the hub, Catwoman is on the roof top of the Gotham City Police Station, and can be bought for 125,000 studs after she is defeated.

In the 3DS version, Catwoman is unlocked for purchase after her motorcycle is destroyed. She costs 100,000 studs.

Catwoman's cowl appears in the ending credits of The LEGO Movie on a conveyer belt being loaded into a yellow truck.

Catwoman without her visor 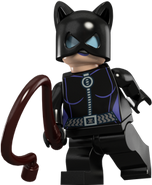 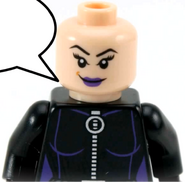 The backside of 2012 Catwoman's head. 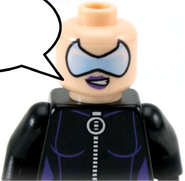 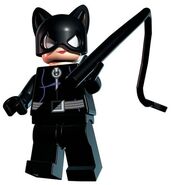 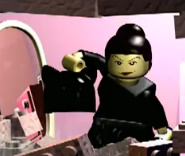 Catwoman on her motorcycle 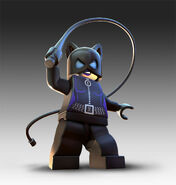 Catwoman and her catcycle's appearance on the official website's game 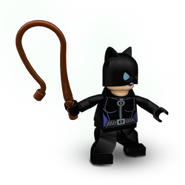 Her mask only appears in the end credits of The LEGO Movie.