Cave Johnson is a Portal 2 minifigure appearing in LEGO Dimensions. He is not a communicable character as his only appearance is archive recording and a painting appearing in the game.

Cave Johnson was the owner and founder of Aperture Science, where he created different scientific inventions. He was assisted by Caroline, who's mind was later preserved inside an AI named GLaDOS and apparently forgot her life as Caroline. He later deceased, with his abandoned laboratory and company existing under the labors of robots and GLaDOS, who was later shut down by Chell, only to be reactivated by Chell and Wheatley. His recorded voice would frequently play in the abandoned and broken down section of the laboratory, under the normal, functioning (albeit abandoned by humans) laboratory. It is possible he had a relationship with Caroline. 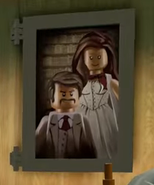 Cave Johnson with his secretary Carolina

As a core
Add a photo to this gallery
Retrieved from "https://brickipedia.fandom.com/wiki/Cave_Johnson?oldid=1949818"
Community content is available under CC-BY-SA unless otherwise noted.