The Cave Woman is a Minifigure released in 2011 as part of 8805 Minifigures Series 5. She has reddish-orange hair that is rubber material. She also has a bone to go on her hair, and comes with a club exactly like Caveman's. She also has some back printing.

The cave woman has a single sided head with a more or less confused expression. Her hair was later reused for Ann Lee from the Monster Fighters theme, but with a crossbow bolt in the hair instead of a white bone. Her torso is yellow with printing of a ripped cloth full of stitches. It also depicts a necklace with a rock or crystal on it as well as dark yellow printing that depicts a cut down body shape used on most female minifigures and a belly button.

She is the wife of the Caveman. 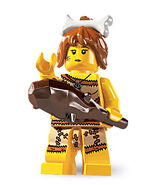 A rear view of the disassembled Cave Woman minus the hair

Deutsch Français
Community content is available under CC-BY-SA unless otherwise noted.
... more about "Cave Woman"
RDF feed
Accessories
Club (Dark Brown) Short Bone +
Appearances
8805 Minifigures Series 5 +
ArticleRating
4 +
Image
Col069.jpg +
InfoboxTemplate
Minifigure +
ShopDescription
While the Caveman is trying to build new i … While the Caveman is trying to build new inventions, the Cave Woman is the one who actually gets all the practical things done. She smashes rocks to make tools, creates clothing out of hides and skins, chases off big meat-eaters and assembles clever traps for catching supper using sticks, stones and bits of shells.</br></br>Despite having a bigger brain, the Cave Woman is very fond of her dim-witted mate. Recently, she’s been thinking about doing some inventing herself, perhaps starting with a written language and a stone-based calendar system. Maybe then she’ll finally be able to get the Caveman to remember his own name…not to mention her birthday! his own name…not to mention her birthday! +
Theme
Minifigures
Series 5 +
Title
Cave Woman +
Years
2011 +
Advertisement