Cedric The Bull is a character from the Knights' Kingdom line that was released in 2000.

Cedric wears a black helmet same as the ones first seen and worn by the Dragon Masters minifigs with a set of horns attached to the top and has long, unkempt, black hair sticking out from under it. His eyebrows are black and bushy with an angry expression. Like his companions Gilbert and Weezil Cedric's eyes are grey rather than the usual black color. He has a bushy black mustache. Cedric's torso is black with his bull emblem in the middle and the top part of it having what appears to part of a red cape with a yellow broach. His arms are grey and his hands are red. His waist part has a belt similar to the one Richard the Strong wears but in red printed on it. His legs are black.

This evil leader is obsessed with the thought of taking over the castle, seizing the power, and banishing King Leo and his family from the land. Night and day, Cedric spends his time planning attacks. Cedric has two different backstories in different sources: According to a US Lego Mania Magazine it says that Cedric used to be one of King Leo's best knights but Cedric turned on Leo and now he wants to rule the kingdom for himself. However according to the game manual for 5723 LEGO Creator Knights' Kingdom, the Lego Knights Kingdom Minifigure Handbook, and a storybook called Medieval Mischief and Mayhem it instead says that Cedric is the 13th prince of an unknown king from a far distant unknown land. When the king died he left his country to be divided up between his sons to rule however only 12 of the sons got a share of land to rule and there was no land left by the time it was Cedric's turn to receive his share. The exact details of what happened after this are not fully explained but it can be assumed that Cedric was furious about this so he either left on his own accord or was banished for unknown reasons and became a rogue. During sometime in either of these backstories he found an orphaned Weezil alone and abandoned, Cedric took pity on the boy taking him in and raising him as his own son.

Cedric is the leader of the Bulls, a group of rogue knights who form their headquarters in the forest surrounding Leo's castle. Cedric's most trusted minions include Weezil, his adopted son who's also an expert on traps and trailblazing and Gilbert The Bad, a siege engineer. In the storybook, Cedric is joined by a former Lion guard, Boris, who had been banished after attempting to steal Leo's crown.

Cedric appeared in many games while the Knight's Kingdom line was active, including LEGO Creator Knights' Kingdom and LEGO Island 2 as well as being seen in LEGO Print Workshop and 5784 Soccer Mania

In Creator Knights Kingdom, he plays the main antagonist, and the player's task usually involves stopping Cedric from plotting and the like.

In LEGO Island 2, he returns as the leader of the Bulls; though on the Castle Island stage, in the PC and Playstation versions of the game the Bulls and Lions are portrayed more as perpetually fighting for the fun of it than due to any lasting animosity. Cedric, however, owns a castle and is the villain of the island. Cedric is seen as a minion of The Brickster as well as an ambitious and evil warlord. The player, as Pepper Roni, ends up fighting Cedric in the sub-game "Raging Bull" and in the end Cedric is defeated. In the PC version he lands on a catapult which sends him flying into the air and possibly into the ocean. In the Playstation version he just runs away to unknown whereabouts. In the Gameboy Color version Cedric has a hideout deep in the forest, after Pepper makes his way through the forest chasing after Weezil and avoiding Bull Soldiers Pepper finally makes it to Cedric's hideout where Cedric is seen interacting with The Brickster and fights Pepper inside the hideout by charging at him with a sword. The player has to trick Cedric into running and crashing into the walls. After making him crash into the walls enough times Cedric just simply leaves and isn't seen for the rest of the game. He can also be found as a collectable character card in this version.

In Soccer Mania, Cedric and the Bulls appear as a playable team under the name Cedric's Knights with him as the goalie; in the story mode when chasing after The Brickster Cedric won't let the player through a magic portal which leads to the Arctic world unless the player's team beats his team after the player beats his team Cedric keeps his promise and allows the player through the portal; Cedric then later on reappears in the final match of the story mode as now part of The Brickster's Intergalactic team. Cedric also owns a Castle themed pitch called "Cedric's Castle" which despite the name isn't actually a castle like the one seen in Lego Island 2 and is more of a fort or camp deep in the forest.

Cedric in a set of silver armor 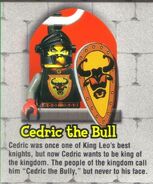 Cedric in the PC version of LEGO Island 2

Cedric the Bull as he appears in the PS1 version of 5774 LEGO Island 2: The Brickster's Revenge 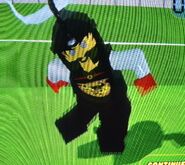 Cedric in the Time Cruisers comic