Brickipedia
Register
Don't have an account?
Sign In
Advertisement
in: Articles in need of expansion, Class 4 articles, Ninjago Minifigures, Minifigures introduced in 2019
English

Char is a general of the Pyro Viper minifigure from Ninjago: Masters of Spinjitzu.

Char's head was also cast in brown for the Pyro Whipper; in black and blue for the Maaray Guards and Glutinous; and in orange and gunmetal gray for Boa Destructor, Cobra Mechanic, Python Dynamite, and Viper Flyer. He shares his shoulder armor piece with the Whipper and the Pyro Destroyer; the part was also cast in gold for Aspheera. His torso and tail piece prints are unique, but the tail piece is the same used for other Serpentine generals such as Pythor.

As revealed in "Never Trust a Human", Char was once a servant to the Serpentine King Mambo, but quickly transferred his allegiance to Aspheera after she overthrew his master. He seems to have eventually been mummified, as in "Powerless" Aspheera comes across him in a sarcophagus in the Ninjago Museum of History. She inadvertently brings him back to life, and he swears loyalty to her yet again, though Aspheera has no recollection of him. He then accompanies her throughout her campaign of vengeance against Wu, before disappearing shortly before Aspheera’s defeat in "Vengeance Is Mine!" It is unknown what became of him as a result. 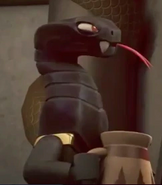