This article is about the Alpha Team member. For the Agents member, see Agent Charge.

Charge is the Alpha Team electronics expert who appeared in all three years of the theme. He has appeared in all three Alpha Team series, but was completely redesigned Mission Deep Freeze. He then had a uniform like Flex's, only with red highlights rather than orange. He also seemed to have shaved, as he went from having a goatee and mustache to having only a small amount of stubble on his chin. 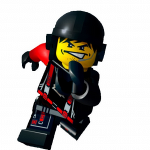