Brickipedia
Register
Don't have an account?
Sign In
Advertisement
in: Class 2 articles, City Minifigures, Minifigures introduced in 2013,
and 3 more
English

"There she is, LEGO City!"
―Chase when he returned to LEGO City

Chase McCain was a famous policeman well known throughout LEGO City who once brought down Rex Fury. Natalia testified against Rex anonymously, but Chase accidentally gave her identity away, making him have to leave LEGO City. Two years later, he returned and found out Rex Fury escaped and had begun a huge crime wave. In order to protect Natalia, Chase once again became a policeman and went undercover to bring down Rex Fury once and for all.

Note: There are no Robber or Civilian Disguises.

Chase McCain in his policeman uniform

Chase McCain in his Fireman disguise

Chase McCain in his Miner disguise with Rex Fury

Chase and Natalia fall in love for the first time, two years before LEGO City Undercover

Chase McCain with the Wii U Gamepad

Chase at the farm 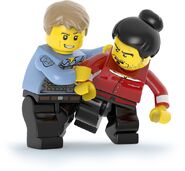 Chase sliding down a tightrope