Brickipedia
Register
Don't have an account?
Sign In
Advertisement
in: Class 4 articles, Minifigures introduced in 2015, Ninjago Minifigures,
and 3 more
English

This article is about the Ninjago villain. For the character from Indiana Jones, see Chen (Indiana Jones).

"Only one can remain!"
―Chen

Chen is a minifigure in Ninjago in 2015. He is the main antagonist of the fourth season of the Ninjago: Masters of Spinjitzu TV Series. He is Skylor's father as well as the owner of Master Chen's Noodlehouse, the host of the Tournament of Elements, and the leader of the Anacondrai cult. However, he was banished to the Cursed Realm in "The Corridor of Elders".

Sometime long ago, Chen served as a mentor to Garmadon (who still had evil in his blood) and Clouse. One day when Garmadon and Clouse were sparring, he made a wager that who ever won would become his right-hand and gain lordship. So Garmadon cheated and won, regardless that Chen knew he had cheated, and was given the title "Lord Garmadon".

Some time later, Garmadon and Chen were discussing the rivalry between humanity and Serpentine. Garmadon said there could be a truce, but Chen told him to never trust a snake. Chen gave Garmadon a love letter written by Sensei Wu which was for Misako, and convinced Garmadon to change the letter to make it seem it came from him.

Chen tricked the Serpentine into starting a war and attacking first, but the Elemental Masters (including Kai's father) fought back. Chen then told Garmadon the battle plan was successful, but Garmadon who still had good in him decided to go and defeat the Anacondrai for Misako. However, when his henchmen Clouse got the message Chen's plans are going to be foiled, he used a spell to turn one of the elemental masters evil. After his plan backfired anyways, he and Clouse were banished to their island, and he began to lose his sanity.

As he started the tournament, he invited the ninjas and the current elemental masters to his island. His assistant Clouse tried to convince him to deal with the ninja first, but Chen refused to mess up the tournament. When he figured out the ninja were working together, he and Clouse decided to do anything to break their alliance and their friendship with the elemental masters. When Chen called Lloyd a cheater in front of all the elemental masters, they realized Chen was a cheater, and Clouse suggested to him to let them go, so they could continue the evil plot without suspicion. Chen then told the elemental masters about the Staff of Elements in order to destroy their alliance, turning them against each other. When Lloyd told them about the spell of the anacondrai Clouse is going to cast, Clouse pretended to be innocent, which put the alliance in further peril. After Nya infiltrated the island and touched Clouse's spell book in a disguise of a kabuki servant, Chen was informed by Clouse that someone had touched the book, and that person was most likely working as a kabuki servant. Chen checked every kabuki servant on the island, and when Nya was found out to be the traitor, Clouse ran after her in the attempt to finish her off. However, when she escaped, Clouse suggested continuing the tournament while hunting Nya after she escaped, and to track her down so he could capture her. Clouse suggested to him to force Skylor to fight Kai, and when he listened to Clouse, Skylor ended up as a traitor who imprisoned Kai with Chen. Chen then stole all the elemental powers, turned Kai (who was spying on him and Clouse) against Lloyd and almost unleashed the spell until Kai broke the staff. Clouse then imprisoned Skylor and suggested that Chen pretended to apologize to her. However, Clouse's plan was foiled when Chen stupidly told about his plot, making Skylor realize that Chen was manipulating her, so she flew away on a hoverboard. Clouse tried to speed up her hoverboard just so he can finish her off by making her lose balance, as he planned to do without Chen. Clouse and Chen then chased her on the main anacondrai copter,

Clouse gets distracted by Garmadon and got banished into the cursed realm after he opened its portal in a fight with his arch-rival, thus betraying Chen to feed the world into the realm.

As soon as Chope and Zugu read the spell from Clouse's spellbook, Chen and his minions (possibly with the exception of Clouse who was banished) turned into fake anacondrai. Then, Chen sent his anacondrai to find Pythor so they could turn into true anacondrai. When Chen crossed the border of the Corrider of Elders, Pythor decided to ally with the ninja and aid them by releasing the anacondrai from the cursed realm. Garmadon sacrificed himself so he would be able to defeat Chen with the help of Arcturus and his minions. After Garmadon was banished, Arcturus and his army were released and Chen got cursed alongside his goons, being surprised because his plot didn't involve being cursed. On the way into the portal, he regretted his selfish actions towards Skylor, but didn't truly redeem himself(he was faking), and as a result he yelled at Skylor, asking her to save him. When he already got pushed completely into the portal, the portal closed itself, thus ending the threat of Chen and his cultists.

Chen is one of the villains revived by Sensei Yang during "Day of the Departed". At first, he joyfully tests the buttons of his new throne/vehicle, but eventually gets annoyed by not knowing which button does what. When the villains choose their respective opponent, Chen chooses Kai and Nya, and goes after them alongside Eyezorai and other of his fake Anacondrai warriors. They are defeated partly by Chen's inability to guess what his buttons do.

Chen is later mentioned in "Questing for Quests", with Zane reminding his fellow Ninja that Chen is in the Departed Realm (or deceased), and thus not available as an antagonist for them to defeat. 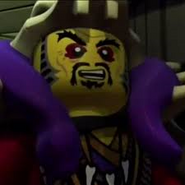 Chen from the TV series

With the Staff of Elements

In in his Anacondrai form 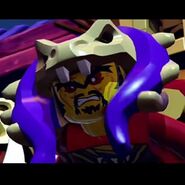 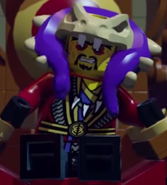