Chewbacca is a Star Wars minifigure that was introduced in the set 3342 Star Wars 3, released in 2000.

The first variation of Chewbacca, molded in old brown. It is made up of an all-brown torso and legs, with a unique piece for his head that also extends down to his chest and back, which represents his thick fur and the bandolier he wears. The face of the piece has indentations for the eyes that are nearly always in shadow, making paint unnecessary, a nose tipped in black and a mouth, both of which jut out slightly, making the piece an extremely accurate representation of Chewbacca.

The second variation of Chewbacca is nearly identical to the first, the difference being a slight change in colour; this version is reddish brown.

The microfigure Chewbacca is old brown with some lighter brown printing in the shape of tufts of fur. The grey and black bandolier is printed across his chest, starting at his left shoulder and ending at his right hip. His mouth is open and the teeth bared in a snarl.

The third variation of Chewbacca was introduced in 2014, it vastly improved on detail most notably towards the printings of Chewbacca's torso and legs. Both feature light brown fur-like printings on Chewbacca. His face is also detailed with black pupils, nose and mouth being shown.

Chewbacca, also known as "Chewie", was a Wookiee, a physically intimidating, tree-dwelling race, who was a good friend of Jedi Master Yoda, and along with Tarfful helped him escape from the Clone Troopers on Kashyyyk during Order 66. Afterwards, he fought against the Galactic Empire for the liberation of Kashyyyk, but was captured. Released by Han Solo, to whom he owed a life debt, he eventually became a long-time companion of the smuggler, and the co-pilot of the Millennium Falcon. Later he and Han join the Rebellion and participated in many battles along with Luke Skywalker, Princess Leia, R2-D2 and C-3PO that led to the eventual destruction of the Galactic Empire. He is the only star wars mini figure that earned a medal that doesn't have a medal version.

Chewbacca appears in The LEGO Movie along with Han Solo, Lando Calrissian, and C-3PO when they are on their way to a party at Naboo and end up in the same universe as Emmet, Batman, Wyldstyle, Unikitty, Benny and MetalBeard. 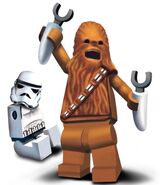 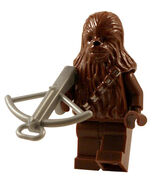 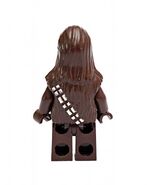 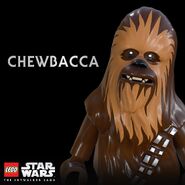