Brickipedia
Register
Don't have an account?
Sign In
Advertisement
in: Class 3 articles, Minifigures (theme), Minifigures introduced in 2013,
and 6 more
English

"What you folks need is a guy in a chicken costume!"
―Chicken Suit Guy

The Chicken Suit Guy is a Minifigures Series 9 minifigure released in January 2013. He will also make an appearance in LEGO Minifigures Online.

The Chicken Suit Guy has a new hat piece that represents a chicken head with a hole that shows his face. The hat has an orange beak, two black eyes with white pupils, a red comb and a red wattle. He has a yellow head with an open, smiling mouth, showing his upper teeth, and brown eyebrows. He has a plain white torso. His arms are a mould, exclusive to him, that are shaped like wings. He has orange legs with white hips, and some white feathers at the top of them, as well as red claw markings at the bottom.

He appears in LEGO Legacy: Heroes Unboxed as an attacker with the abilities What the Peck, Wings of Fury, Drumstick Kick, Spring Chicken and the Ultimate ability Chicken Tender Eyes. When he was first released, he lacked the fourth ability.

Chicken Suit Guy is the first character to be unlocked in the game and starts out at 3 stars. He is notable for his easy gear unlockables and high-damage attacks. 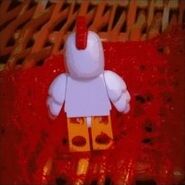 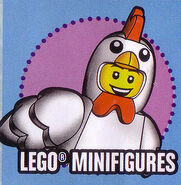 Chicken Suit Guy cameo in The LEGO Movie 2: The Second Part behind the Giraffe Suit Guy. 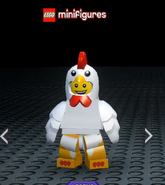