Chief Guard is one of many guards in the depths of the mines. However, this brutal guard oversaw the other slave drivers, and was immensely strong. He appears in 7199 The Temple of Doom alongside the Thuggee Guard.

When Indiana Jones, Short Round, and Willie Scott begin their escape from the Temple of Doom, this guard was the only real threat to stand in Indy's way. The guard eventually dies during a fight with Indy atop a rock crusher with a conveyor belt. 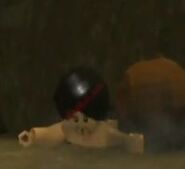 The guard is crushed by the rock crusher