Chopper, also known as C1-10P, is a Star Wars: Rebels minifigure released in 2014. He is owned by Hera Syndulla and a crew of the Ghost. He is made of spare parts due to his crew's lack of funds.

C1-10P is made of five pieces. Its parts resemble that of a squashed version of other Astromech Droid's markings. His head is a standard R5 head piece.

C1-10P, commonly known as "Chopper," was a C1-series astromech droid with masculine programming who was active during the Clone Wars and the early years of the Galactic Empire. He was a member of a Lothal rebel cell led by the Twi'lek captain Hera Syndulla and the Jedi Kanan Jarrus that fought against the Empire. He was responsible for maintaining the Ghost, a modified VCX-100 light freighter which served as the rebel cell's main base of operations. During his time with the Lothal rebels, Chopper took part in numerous raids and missions against Imperial targets. Due to his old age and lack of regular maintenance, Chopper developed a cantankerous and mischievous personality. Despite these personality flaws, he was a loyal member of his rebel crew. 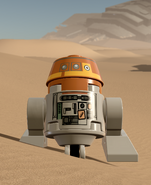