In all sets Cinderella is dressed in a full-length short-sleeved ball dress and matching ball gloves. Her torso piece shows parts of light nougat bare skin on her elbows and neck. She has blond hair tied in a bun with a blue hairband. Her face is smiling. The dress has three variants.

Cinderella was a poor young woman treated cruelly and unfairly by her sinister stepmother Lady Tremaine and two jealous stepsisters Drizella and Anastasia, who turned her into a housekeeper. One day the King, on behalf of his son Prince Charming, invited every girl in the land to a ball, where he was willing to find a wife. Cinderella longed to go, but was not allowed as she was forced to stay behind and continue to do chores while her stepfamily attends, but her fairy god-mother gave her an enchanted outfit, a horse and a carriage. The charm lasted just until midnight but Cinderella managed to impress the prince so much that he decided to find her after she fled. The slipper she left behind while leaving in a hurry was tried on by every woman in the kingdom but fit perfectly only on Cinderella’s foot. She proved to be the mysterious beauty from the ball and married the prince. They lived happily ever after in a castle.

Cinderella in her ball dress (seen from a different angle) 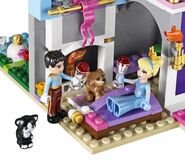 Cinderella in her Castle 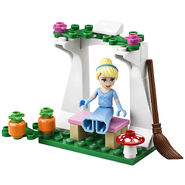 Cinderella sitting on a bench
Add a photo to this gallery