The Circus Clown is a minifigure introduced in 2010, as part of 8683 Minifigures Series 1.

The Circus Clown includes many unique parts and features. He has a large red afro hairpiece, which was later used in black for the Disco Dude from Series 2. His face shows white makeup around his mouth and a red nose. His torso is lime green with printing showing red buttons and a red and white polka dot bow tie, and his trousers are made of two colours, light blue and red. There are patches of the opposite colour on each leg. He also comes with a golden horn. He wears a pair of white gloves rather than having hands of the same colour as his flesh tone, which is yellow.

In The LEGO Movie, the Circus Clown is among the Master Builders that meet in Cloud Cuckoo Land. At one point, he and Lizard Man were face painting Batman in Cloud Cuckoo Land when the Fellowship of Strangers arrive. He is also a member of Clown Town, which is one of the many realms in the universe. Emmet also briefly dresses as him when picking his clothes to start the day.

In The LEGO Movie 2: The Second Part, the Circus Clown is first seen in Harmony Town dancing alongside other minifigures and mini-dolls under control of the "Catchy Song". Later on, two Circus Clowns are seen among a crowd of other minifigures, minidolls, and Duplos attending the wedding of Queen Watevra Wa'Nabi and Batman. The clowns are also seen crying after Emmet crashes the wedding. 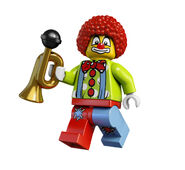 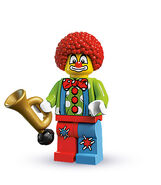 The Circus Clown in a promotion

In a Lord of the Rings short

Emmet dressed as the Circus Clown

Two Circus Clowns in the audience in "The LEGO Movie 2: The Second Part".

The Circus Clown in The LEGO Movie 2: The Second Part dancing with other minifigures.

The Circus Clown in "LEGO Ninjago: Masters of Spinjitzu"

Deutsch Français
Community content is available under CC-BY-SA unless otherwise noted.
... more about "Circus Clown"
RDF feed
Accessories
Horn +
Appearances
8683 Minifigures Series 1 +
ArticleRating
2 +
Image
CC1.jpg +
InfoboxTemplate
Minifigure +
ShopDescription
“Honk honk!” Everything in life is … “Honk honk!”</br></br>Everything in life is a joke to the mirthful, merry and mischievous Circus Clown. Whenever things get too dull, up he pops with a banana cream pie to toss, a bottle of seltzer to spray, or a honk of his horn to brighten your day. You can always count on him to appear with a funny gag at just the right moment to lighten the mood.</br></br>The Circus Clown is a master of physical comedy, and it’s a good thing, too – aside from a honk of his horn or his big red nose, he never makes a sound, even when doubled-over with laughter at his own silly antics!ver with laughter at his own silly antics! +
Theme
Minifigures
Series 1 +
Title
Circus Clown +
Years
2010 +
Advertisement