Clark Kent has plain earth blue legs, and an earth blue torso with flesh-coloured hands. The torso has printing on the front, depicting a black belt and a red tie. It also shows a white unbuttoned shirt, revealing a blue Superman suit complete with red and yellow logo underneath. Clark Kent's head piece is flesh-coloured, with darker flesh printing used for facial outlining. Black is used for the eyes, eyebrow and mouth, forming a determined expression, and black and white printing is used for Clark's glasses. The minifigure has a black hairpiece which is parted on one side and combed over, a piece first used in black for the Robin minifigure.

Clark has Superman's hair and a similar face, but with glasses. He wears a similar un-ripped but a lighter blue suit, a white shirt with a red and black-striped tie, he has blue arms, light nougat hands and blue legs.

Born on the planet Krypton to scientist Jor-El and his wife Lara-El, Kal-El was sent to the planet Earth, Jor-El's only attempt to save his son during Krypton's destruction. Adopted by the Kent family, and renamed Clark Kent, he grew up in the town of Smallville, and would later learn of his Kryptonian powers and ancestry and became Superman, the Man of Steel. Superman's archenemy is Lex Luthor, who is jealous of Superman and wants to destroy him and look like a hero for doing it. Other enemies of Superman are Bizarro, Brainiac, and General Zod. The Man of Steel also partners with Supergirl, his cousin; Superboy, his clone; and Lois Lane, a reporter Superman is romantically interested with. Superman also works with Batman and Wonder Woman occasionally. He and Batman mistrust each other and don't always get along very well, but Superman has shown attraction to Wonder Woman.

He is a member of the Justice League, which also consists of Batman, Flash, Green Lantern, Wonder Woman, Cyborg, Aquaman, Martian Manhunter, and sometimes Nightwing, Batgirl, Huntress, Hawkman, and Shazam.

On console versions, Clark Kent reports on Batman's defeat of The Joker at the Man of the Year award ceremony.

He can also be unlocked by collecting 100 gold bricks. He can be found on a rooftop north of City Hall.

On portable versions, he appears only in the story as Superman. However, Clark's minikit can be found on the level Ace Chemicals. He costs 20,000 studs. 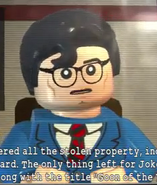