“The truth is around here somewhere!” --Classic Alien

The Classic Alien is a Minifigure released in 2012 as part of 8827 Minifigures Series 6.

This minifigure's head is a new mould which is grey and round with a pair of black bulbous eyes and a neutral expression. The torso is also grey with muscle printing on the front, and has dark grey hands. Its legs are grey and unprinted with a dark grey hip joint. His accessory is a white laser gun with a transparent green laser. This is the second alien to be released in the Minifigures theme, the first being the Space Alien. 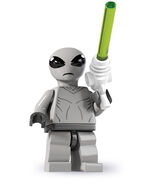 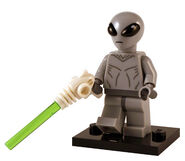 On display stand with accessories

The Classic Alien as it appears on LEGO.com when a product cannot be found.

Deutsch Français
Community content is available under CC-BY-SA unless otherwise noted.
... more about "Classic Alien"
RDF feed
Accessories
Ray Gun (White) Laser Beam (Green) +
Appearances
8827 Minifigures Series 6 +
ArticleRating
2 +
Image
Col081.jpg +
InfoboxTemplate
Minifigure +
ShopDescription
'“The truth is around here somewhere!” … “The truth is around here somewhere!”</br></br>The pyramids? These guys built them. The microwave? They invented it. Elvis? Got him right up there on the mothership. All of those totally out-there conspiracy theories about little gray men from outer space are absolutely 100% true – or at least, that’s what the Classic Alien believes.</br></br>You see, he’s been out of communication with the home planet for a while (thanks to that whole Area 51 thing), and all of his recent news has come from what he’s read in supermarket tabloids and seen on the internet. Those reporters and bloggers really seem to know their stuff, so he figures they must have the real scoop. After all, if it’s not all true, then what’s he even doing here? all true, then what’s he even doing here? +
Theme
Minifigures
Series 6 +
Title
Classic Alien +
Years
2012 +
Advertisement