Brickipedia
Register
Don't have an account?
Sign In
Advertisement
in: Class 2 articles, Articles with conjectural titles, Space,
and 2 more
English

Classic Space is an unofficial term retrospectively attributed to the Space sets that were released before 1987, and shared some common characteristics that set them apart from the following Space sets. Most importantly, all Classic Space Minifigures featured the old visorless helmets, which were eventually phased out in favor of newer helmets with movable visors in 1987. There were also no truly different factions as in the time after 1987. All astronauts of Classic Space were peaceful explorers, and there were no antagonistic groups. The larger flying craft of the Classic Space sets all featured a brick with their set number on it. 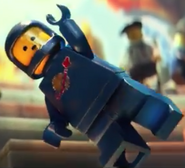 Benny, a character who is a homage to LEGO Classic Space