This article is about the minifigure named "Biff Barker" in July-August 2007 LEGO Magazine. For the character from the May-June 2007 LEGO BrickMaster Magazine, see Trike Driver.

The Claw-Tank Driver, also known as Biff Barker,[1] is a Mars Mission minifigure.

The Claw-Tank Driver wears the standard Mars Mission astronaut white and orange spacesuit, with a white helmet and gold visor. He reuses the face of the 4589 RC Nitro Flash racecar driver from Drome Racers.

When piloting the Gripley, the Claw-Tank Driver does not wear a helmet. 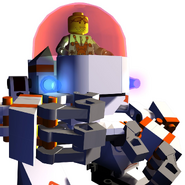