"Like many people, William Tockman has always been very interested in clocks and timing. Unlike most, he decided to wear a big clock on his face, draw smaller clocks all over his outfit, and become a professional clock-themed super-criminal. He may not be very good at it, but at least Clock King™ always shows up to big Super Hero vs. Super-Villain fights exactly on time!" -LEGO.com

The Clock King is a DC Comics minifigure who appears in The LEGO Batman Movie.

William Tockman was an intelligent man in Star City who spent his life trying to support his challenged sister Beverly. When he found out from a doctor that he was dying he became consumed by fear that afraid that nobody would care for his sister after he was gone.

Using his highly acute mind for mental-math and timing, William attempted to rob a bank to supply for his sister but was foiled by the Green Arrow. While he was imprisoned, William learned that his sister had died and that also he in-fact was not dying of terminal-illness but that his doctor had switched up his patient files. Consumed by anger and grief, William declared vengeance on Green Arrow and took up the alias of "The Clock King"

As the Clock King, William used clock and time themed gadgetry while relying on his brilliant understanding of timing and math to commit crimes, dodge attacks from his enemies, and make quick get-aways.

In Batman: The Animated Series, Clock King was reimagined as an older businessman named Temple Fugate. Fugate was an obsessive and tightly-wound man with a perfect internal clock but who's company was unfairly sued leading him to start suffering from a stress-related breakdown. Under the advice of Gotham's then-mayor Hamilton Hill, Temple took a break from his rigorous schedule to set his mind at ease but as a result missed his trial and lost thousands of dollars.

Temple decided this was the fault of Hamilton Hill and years later resurfaced as the criminal "Clock King" who sought vengeance against the mayor by using his perfect sense of timing to devise perfect crimes against him and perfect get-aways. He would eventually be defeated by Batman.

Hoping to raise money to treat his sister's illness, and mistakenly believing himself to be living on borrowed time, William Tockman attempted to rob a bank but was thwarted by the Green Arrow. Now seeking revenge, Tockman operates as the time-obsessed criminal, the Clock King. 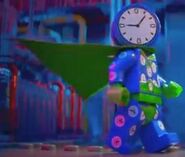