Brickipedia
Register
Don't have an account?
Sign In
Advertisement
in: Class 2 articles, Minifigures introduced in 2012, Minifigures (theme),
and 4 more
English

The Clockwork Robot is a Collectable Minifigure released in 2012 as one of the sixteen minifigures from 8827 Minifigures Series 6.

The robot has light grey legs printed with springs and metal toecaps. It has light blue hips printed with what is possibly a metal belt. His torso is light grey, with rivets, dials, and some sort of meter on a blue control panel printed on it. It has red hands. It wears a neck bracket on his back, that has a large unique key attached into it by means of a sideways stud. Its head is rectangular, has a mouth with various glowing lights printed on it, as well as moulded light blue eyes. There is a stud on the top of its head.

Clockwork Robot appears in LEGO Legacy: Heroes Unboxed with the abilities Time Flies, Outta Time, Alarmed and Dangerous and All Wound Up. He was originally available for 65 tiles but got cut to 10 tiles instead. 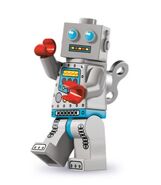 Deutsch Français
Community content is available under CC-BY-SA unless otherwise noted.
... more about "Clockwork Robot"
RDF feed
Accessories
Wind-up key +
Appearances
8827 Minifigures Series 6 +
ArticleRating
2 +
Image
Col087.jpg +
InfoboxTemplate
Minifigure +
ShopDescription
“Beep-boop! Who-wants-a-hug?” The C … “Beep-boop! Who-wants-a-hug?”</br></br>The Clockwork Robot just wants to be loved. He may have started out as a simple toy, but somewhere along the way his little ticking heart took on a life of its very own. Now that he can walk and talk and think (as long as somebody remembers to keep his key wound up), he’s hoping to find his true place in the big LEGO® world.</br></br>But what does a Clockwork Robot do? He can walk around making beeping sounds, and he has lots of shiny buttons and dials, but he feels there must be more to life. He’s tried copying some of the other Minifigures, but he kept falling off his horse, deep-sea diving made his gears rusty, and masked wrestling was definitely a big mistake. Maybe he’ll just try hugging everybody he sees instead!ust try hugging everybody he sees instead! +  and Ever since he was built, the Clockwork Rob … Ever since he was built, the Clockwork Robot has been able to not only walk and talk, but more surprisingly, think! Now there's a whole lot of new experiences that the Clockwork Robot is determined to etch into his memory banks. Whether that means hes taking up horseback riding, deep sea diving, or even professional wrestling, this robot is trying to live every day like it's his last!ying to live every day like it's his last! +
Theme
Minifigures
Series 6 +
Title
Clockwork Robot +
Years
2012 +
Advertisement