A Clone Trooper Sergeant is a minifigure from the Star Wars theme.

The Clone Trooper Sergeant minifigure features white legs with a black leg joint, and a white torso with black hands and olive green arms, the green being used in on the figure to denote the trooper's rank of sergeant. The torso's front printing includes black for outlining the various plates and parts of the armour, including a belt at the base of the piece. Also, on the left chest plate, four green dots in a horizontal line are present. This minifigure has a flesh-coloured headpiece that features printing for several facial features- black eyes with white irises, downturned black eyebrows, a mouth outlined with black and filled with white, depicting gritted teeth, and darker flesh printing for outlining and wrinkles typical to non-Clone Wars clones from 2013 onwards

The trooper's helmet piece is white, with a predominant crest at the top, typical for Phase I clone trooper armour. Black and grey printing is used to represent the visor (which is printed silver to create the effect of it being polarised) and other aspects of the helmet. A vertical green stripe also runs down the centre of this piece, from the base of the crest to the bottom of the helmet. Green is also present below the bottom of the whole visor section. The trooper comes with two accessories, grey electrobinoculars and a black blaster.

Clone trooper sergeants were clone troopers who were placed in command of squads of nine troops. Ranked between a corporal and sergeant-major, sergeants were the lowest ranked troopers to have coloured flashes of paint present on their armour during the early Clone Wars, when colour was used to denote rank as opposed to the division the clone troopers served. 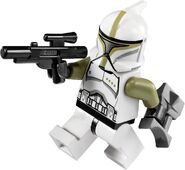