Colonel Hardy is a minifigure released in 2013 in the DC Universe Super Heroes theme.

Hardy has a smirking head without accessories. He has a dark tan torso printed front and back with military armour, which contains a radio and pouches. His legs are also dark tan and his hands are light nougat.

Colonel Nathan Hardy was a member of the United States Air Force. He welcomed Lois Lane to the base at Antarctica.

After General Zod issued his threat, Kal-El surrendered himself to the base Hardy was at. He watched Lois' conversation, and Kal-El informed Hardy that he wasn't their enemy.

When the fight broke out in downtown Smallville, Hardy was order to lead the attack on the Kryptonians. His helicopter was taken out, leaving Hardy the only one left alive of his squad. He then attempted to engage Faora in a fight, but was saved by Superman, and afterwards deemed him as not Earth's enemy.

Lois then convinced Hardy to take Kal-El's ship and crash into Zod's ship, which was destroying Metropolis, and create a portal to the Phantom Zone. On the way to the ship, Faora attacked the plane, dispatching Hardy's men and throwing Lois out of the plane, who was saved by Superman. Sacrificing himself, Hardy crashed the plane into the ship before Faora could stop him, activating the portal and brought Faora and the ship back to the Phantom Zone with him and Emil Hamilton still in it. His current status in the Phantom Zone is unknown.

Hardy at the Toy Fair 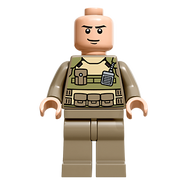 On the home page