The Cavalry Colonel is a Western Minifigure that was first released in 1996. He appeared in six sets as a minifigure, but also appeared as the King piece for both teams in the Western theme in the video game 5702 LEGO Chess.

The 1997 large UK catalog describes set 6706 Frontier Patrol as containing "Colonel Jefferson and his men". While it is not confirmed, it seems likely this name refers to the Cavalry Colonel, as he has the most prominent position in the set. A less likely possibility is the name is the UK name for Colonel Colt Carson, who also appears in the set. 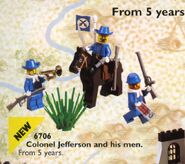