Brickipedia
Register
Don't have an account?
Sign In
Advertisement
in: Class 4 articles, The Simpsons minifigures, Minifigures introduced in 2014,
and 2 more
English

"That robot is made of Batmobile, Hobbit-Hole and SpongeBob playsets! That's... that's mis-setgenation!"
―Comic Book Guy in Brick Like Me

Comic Book Guy (real name: Jeff Albertson) is a minifigure who first appeared in The Simpsons episode "Brick Like Me". He stars as the hidden, but true main antagonist. He was physically released in 2015.[1]

Comic Book Guy is an obese, incompetent, unshaven, and cruel 45 year old man who is said to have lived with his mother. He is obsessed with Comic Books, Science Fiction, and Pop Culture.

Comic Book Guys stars as a character in "Brick Like Me". He is the "Rule-Explainer Guy", as Homer Simpson originally knows him as, Comic Book Guy helps Homer to see if there is any problem with his, as Marge Simpson calls, "Hallucination" (Real world The Simpsons but as LEGO Homer calls "Meat"). Homer realizes that it was a good hallucination and goes hyper about it.

Later Homer tells Comic Book Guy that he never wants to be in the LEGO world. Then we realize he is a double sided face Minifigure and becomes the Bad Guy, He wants everybody to stay in the LEGO world forever as the "Ultimate Collector", and builds a castle as a defense. After Homer realizes he owns every single set ever. Bart Simpson builds a big robot mech to save the day, Bart fires a cannonball (Principal Skinner's headpiece) at the castle, destroying the castle gate, collapsing at him. Bart's Mech eventually falls apart and destroys the castle. Comic Book Guy survives but is a wrecked Minifigure. Homer finds him in a pile of LEGO bricks and kicks his head. However, it was all another hallucination and Comic Book Guy is still alive at this point. 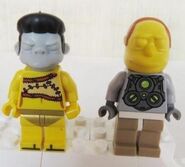