Commander Cody is a Star Wars minifigure based on the clone trooper of the same nickname who appears in the Star Wars universe.

In the set 7676 Republic Attack Gunship, Cody is in orange Clone Wars armor, wearing gray ARC Trooper armor and wielding twin blaster pistols. His helmet is currently unique with an orange stripe on the helmet-fin and small orange marks around the comm-system. Cody's torso is also detailed with bright orange arms and three small bright orange stripes around the curved part on the uniform. His leg piece is the same as other clone troopers- black and white legs. Accessories for Cody include ARC trooper armour and twin pistols.

In the upcoming set 75337 AT-TE Walker, Cody wears updated phase two Clone Trooper armor, with a helmet that more closely resembles Stormtrooper armor. Cody's hips are white, and his legs now have print detailing with orange stripes on his hips and kneepads. His torso is similar to his appearance in phase one armor, though with sharper armor detailing and a rank insignia badge denoting his commander status. Cody's helmet has an orange visor shield, with grey armor plates on each side of the fin.

Cody first made a LEGO appearance in 2005, as a playable character in LEGO Star Wars: The Video Game. Cody's character model for this game is based upon the Star Corps Trooper with an orange pauldron. Cody makes a comeback in 2011 for LEGO Star Wars 3: The Clone Wars. He appears in the mission Rookies, and his Bounty Hunter mission.

A total of thirty-two brick-built Commander Cody Figures were produced and given away. In 2009, Toys Я Us gave away twelve of these figures to those who had entered a raffle.

Key Chains and Other Physical Appearances 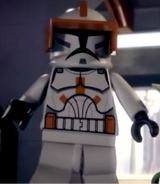 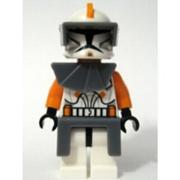 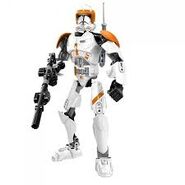 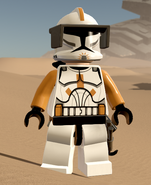 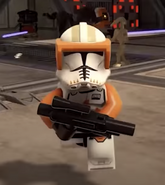