Brickipedia
Register
Don't have an account?
Sign In
Advertisement
in: Class 4 articles, Ice Planet 2002, Minifigures introduced in 1993,
and 4 more

Commander Cold, alternately named Commander Bear in the UK and Japan, is the commander of the explorers in the Space theme Ice Planet 2002, appearing in 5 sets as a LEGO minifigure.

Commander Cold has a unique face, with thick white eyebrows and a white mustache. Like the other Ice Planet 2002 astronauts, Cold has a black, white, and blue spacesuit with a Transparent Flourescent Reddish-Orange visor, although his torso print is unique to set him apart as the commander.

In LEGO Racers, Commander Cold is depicted with the torso of the other Ice Planet 2002 astronauts instead.

In LEGO Battles, Commander Cold wears a black Mini Cap and golden epaulets instead of his original helmet and airtank. His torso is updated with greater detail, including a more defined zipper and an ID badge, and the Ice Planet 2002 logo is also replaced with the Classic Space logo to fit the Mars Mission aesthetic. According to the "Earth Picture 2" concept art (which shows the commander's entire body, and does not obscure him through the video screen filters), his arms and hips are dark gray, and his gloves are white.

Commander Cold is the leader of the astronauts on the Ice Planet Krysto. While conducting research and deploying satellites, they team up with the Space Police and Unitron while dealing with threats such as Blacktron and the Spyrians. In German catalogs, Commander Cold is described as a news specialist.[1] According to his profile in LEGO Legacy: Heroes Unboxed, Cold is characterized as keeping high spirits by always thinking about surfing on a tropical island.

In the LEGO Racers Video Game, Commander Cold appears in the second and fifth circuits as a CPU racer, as the representative of the Ice Planet Pathway race course. His minifigure parts are available by default to the player.

In LEGO Battles, the unnamed Mars Mission Earth commander is never explicitly identified as Commander Cold, but the striking similarities in their designs and the numerous other references to classic LEGO themes strongly imply that this commander is intended to be a cameo by Cold.

The "Earth Picture 2" and "Earth Scene 5" unlockable concept art both depict Commander Cold, with the former depicting the commander and a Robot on the surface of Mars.

In LEGO Legacy: Heroes Unboxed, Commander Cold is an Explorer support unit with the abilities "Ice Saw", "Chill Out", "Stay Frosty", and "Cool, Not Frozen".

In the Piptown United campaign, Commander Cold and Doctor Kelvin were investigating Codex Tiles beneath Krysto's surface when an Alien Clinger named Gorwell began mind-controlling the astronauts. They tried to shut down the air control tower, but were beaten back by Gorwell's drones. Paramedic Poppy, Hedley the Headsman, and the Builders arrive on Krysto in response to the SOS, although Cold and Kelvin are initially suspicious that they are mind-controlled. Cold and Kelvin assist the Builders in stopping ships from entering or leaving Krysto airspace in order to quarantine Gorwell; during this, Commander Cold temporarily joins the Builders' party in mission 2.6 to help repel a Zotaxian invasion led by Locust. Cold and Kelvin escape Krysto aboard the Builders' ship, with Cold setting explosives on the runway. Unfortunately, Deborah and Gorwell manage to stow away on the ship and mind-control Cold, forcing the Builders to fight him. After Gorwell's defeat, Kelvin explains that Commander Cold will be back to normal once they are far enough away.

A 1993 Japanese catalog identifying him as Commander Bear

A 1995 UK catalog identifying him as Commander Bear 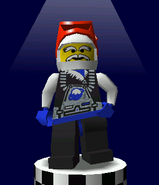 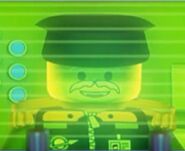 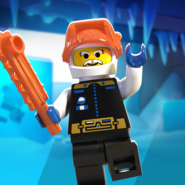 Cold and other Space heroes in LEGO Legacy: Heroes Unboxed

Kelvin and Yeti thinking about Commander Cold in LEGO Legacy


LEGO Racers (Video Game) +
ArticleRating
4 +
Image
sp019.jpg +
InfoboxTemplate
Minifigure +
ShopDescription
A solid support unit who bolsters defense … A solid support unit who bolsters defense and freezes enemies in their tracks. Cold claims he's the chilliest commander on Krysto, a statement that's all but confirmed by his groovy mustache.Trivia<br/>The salt 'n' peppered leader of a scientific excursion to the ice planet Krysto, Commander Cold is as seasoned an adventurer as any other cosmonaut. Many an explorer has wondered how Cold manages to keep such high spirits while stationed on the icy surface of Krysto. His secret? While his body might be stuck in a frozen wasteland, his brain is always on island time. Surf's up!Cryogenic<br/>Debuted in 1993.Frozen Five<br/>Appeared in 5 sets.Nom de Bear<br/>Has also been known as "Commander Bear" in the UK and Japan.Icy Roads<br/>Appeared in the "LEGO Racers" game.s
Appeared in the "LEGO Racers" game. +
Theme
Ice Planet 2002 +
Title
Commander Cold +
Years
1993 +
Advertisement