The Clone Wars
Revenge of the Sith

Commander Gree is a Star Wars-themed minifigure released in 2012, as well as in 2013 where the same design was used again, and in 2014 where the new Phase II design is used.

This minifigure has white legs with a black hip joint. The upper part of the front of the legs are printed dark green, with black printing used for detailing and for representing the knee armour plates. The torso piece is white, with black hands and features the standard The Clone Wars Clone Trooper black and dark grey printing pattern, but with some extra details. On the front, a strip of dark green printing is present from the top of the chest plates in the center, which widens and covers nearly the whole width of the torso just above the belt. A black bandolier with dark grey outlining is also printed on the torso, running from the right shoulder down to just above the belt on the left. Additional printing is also found on the back, with the bandolier continued, a small horizontal strip of green above the backplate, and a more significant dark green design between the backplate and thermal detonator. Gree's head is flesh-coloured, and features the standard The Clone Wars Clone Trooper face- black eyebrows, a black mouth with a serious expression, and white, black and brown eyes. Gree's white helmet features the standard black visor print, with additional dark green down the centre of the helmet and narrowing at the bottom, but leaving the helmet's crest white. One area to each side on the front of the helmet is also coloured in green. The minifigure comes with one other accessory- a black blaster. On his Phase II form, which was introduced in 2014 in the 75043 AT-AP. He has a silver helmet with earth green markings and a bright green "T" visor. He has an olive green torso with a clone trooper print but with black camouflage. He has olive green hips with camouflage printing. And black legs with olive green clone trooper leg printing. He also has earth green arms and black hands. In 2014 he appeared with a medium stone gray stripe across his left leg. In 2019, he was remade with an olive green stripe.

Commander Gree, also known by his number CC-1004, served side-by-side with Jedi Master Luminara Unduli during the Clone Wars. Once, Gree accompanied Unduli to Rodia, where he arrested Separatist Viceroy Nute Gunray, but Gree and his Jedi comrade lost Gunray when Asajj Ventress led a strike force against their command cruiser. Later in the Clone Wars, Gree joined Unduli, Jedi Knight Anakin Skywalker, and Captain Rex during the Second Battle of Geonosis, in which Gree and Rex led their clone battalions against the Separatist battle droids and Geonosian warriors. The battle was won after the Republic destroyed the Separatist weapons factory.

During the final year of the Clone Wars, Gree was transferred to Kashyyyk, where he served as Master Yoda's right-hand man during one of the major Clone Wars battles. As the battle began to turn in the favor of the Republic, Darth Sidious executed Order 66, commanding Gree and another clone trooper to assassinate Yoda. However, the small Jedi ignited his lightsaber and decapitated both Gree and his comrade, and he was able to escape. 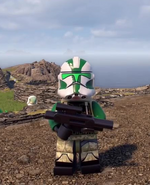