Brickipedia
Register
Don't have an account?
Sign In
Advertisement
in: Class 2 articles, Minifigures introduced in 2008, Batman Minifigures,
and 7 more
English

James W. "Jim" Gordon is a Batman minifigure that appeared in LEGO Batman: The Videogame. He appeared in physical form in 2013. He is the Gotham City Police Commissioner, a friend of Batman, and the father of Barbara Gordon. He reappears in LEGO Batman 2: DC Super Heroes and as a downloadable character in LEGO Batman 3: Beyond Gotham.

In The LEGO Batman Movie, Commissioner Gordon is voiced by Héctor Elizondo.

Gordon's physical variation is based on his appearance in The Dark Knight Rises. He has Mutt Williams' hairpiece. He has black, rectangular-rimmed glasses, and a large dark brown mustache and a second face with a scared expression. His torso is dark blue and mostly features a dark grey, bulletproof vest with the word SWAT on it. He has back printing similar to the front, but with more back pockets. His arms are also dark blue, his hands are flesh, and his legs are black.

In LEGO Batman: The Videogame Commissioner Gordon has a grey male hairpiece, a head with glasses and a mustache. He wears a brown police coat and matching brown trousers.

His appearance is similar in LEGO Batman 2: DC Super Heroes, except his legs are black, he has backprinting that looks similar to Lex Luthor's, and he has a more realistic police badge.

James Gordon is the commissioner of the Gotham City Police Department and one of the few honest officers. He also was one of the only police officers to show Bruce Wayne compassion after his parents' murder, hence why Bruce respects and trusts Gordon so much. Early in Batman's career he formed an alliance with the hero and the district attorney Harvey Dent to take down organized crime in Gotham. However, during a trial Dent was scarred by Sal's "Boss" Maroni and half of his face was hideously scarred. Dent turned into a villain himself, taking the name Two-Face. Though Dent's transformation shook Gordon and Batman, they continued their alliance. Although Gordon doesn't approve of Batman's vigilante methods, as he appreciates the results and protects him from other police officers, such as Harvey Bullock, who don't trust him.

Gordon also has a daughter named Barbara who was inspired by her father's heroism to join the GCPD, but was turned down, which led to her career as Batgirl.

Commissioner Gordon is a member of the Bat-family which primarily consists of Batman, Robin, Nightwing, Red Hood, Red Robin, Alfred Pennyworth, and Batgirl.

In The Dark Knight Rises

Eight years after the events of The Dark Knight, Gordon has lied in order to help cover up the fact that Harvey Dent had murdered five people, which Batman took the blame for. He has decided to resign as Commissioner, but decided against saying so. As Bane is rising and Batman returns, Gordon enters the sewers accidentally, gets hurt, and is brought to Bane. Bane takes the speech Gordon had prepared before Gordon jumped into the sewage pump. He sits in the hospital, operating through Batman and John Blake. Bane defeats Batman and isolates and takes complete control of Gotham. He reveals that Dent was responsible for the five murders and John Blake is disgusted with Gordon, though he still works with him.

When Batman returns to Gotham from the pit, Gordon helps Batman overthrow Bane and Talia Al Ghul by placing a distorter on the nuclear bomb. Batman reveals his identity to Gordon, shortly before he seemingly sacrifices himself. Gordon stays as police Commissioner.

In LEGO Batman: The Videogame, Commissioner Gordon was armed with a pistol and appeared in all three stories and the prologue. He was a boss on the level A Surprise for the Commissioner and was unlocked for purchase afterwards.

In the video game's prologue, Gordon appeared right at the end where he is seen pushing a red button on his desk which lights up the bat-signal.

In the events of Riddler's Revenge, Commissioner Gordon caught The Riddler and Poison Ivy sneaking into a greenery. He ordered the Police Force to defend the building.

During Power Crazed Penguin, Commissioner Gordon and the Police Force confronted Bane and The Penguin at the dock when they stole a satellite that was being delivered. Penguin escaped on his submarine with the satellite, but he abandoned Bane. Bane became angry and threw a police car into the air, which landed back on himself, knocking him out. He was towed to back to Arkham Asylum.

Gordon was later attacked by a Penguin Minion in his office before the satellite was destroyed by Batman and Robin.

In Joker's Return, Gordon was lured to an abandoned carnival by Harley Quinn and The Joker. He was later rescued by Batman and Robin, and Harley Quinn was taken prisoner.

When The Joker and Killer Moth arrived to free Harley Quinn, Gordon was determined to defeat them and dispatched three mobile headquarters and many S.W.A.T. agents to do so. They were destroyed by the clown walker, but Gordon survived and called for help from Batman.

Later, after The Joker and Harley Quinn were defeated, Gordon was there to arrest them and send them back to Arkham Asylum.

Commissioner Gordon appears after Batman and Robin stop The Penguin, Catwoman, The Riddler, Bane, Poison Ivy, Two-Face, and Harley Quinn from escaping Arkham Asylum. He informs them that only The Joker seems to have escaped. He heard how it seemed as though Lex Luthor had free Joker, and suggested that Batman did something about it before the Presidential Election the next day. He was then informed of a break-in at Ace Chemicals by a Police Officer, and when he turned around, realized that many of the Asylum Inmates had escaped.

On the portable versions, his minikit can be found in the level Assault the VTOL. He costs 20,000 studs.

Jim Gordon has devoted his entire life to serving and protecting the people of Gotham City. Starting as a simple beat cop, he worked his way up to detective, and finally to Commissioner of the Gotham City Police Department. After a long and celebrated career of cooperation with the city’s top Super Hero, Jim is finally ready to retire and go on a South African jungle safari but he feels confident in leaving the job in his daughter’s capable hands. Bat-Fact: Has had the same mustache since childhood.

One of Batman’s staunchest allies, the hard-working Commissioner Gordon™ has spent his entire long career cleaning up the streets of Gotham City. Ever since his days as a beat cop, he has always performed his duty by the good old-fashioned rules, no matter what chaos Gotham City’s many super-villains may have thrown his way. Now that he’s retiring, what changes lie in store for his beloved city?

Commissioner Gordon caged up by The Joker and Harley Quinn

After being freed by Batman

Commissioner Gordon with the GCPD

Commissioner Gordon with Batman and Robin in Gotham Cathedral

Commissioner Gordon at his desk 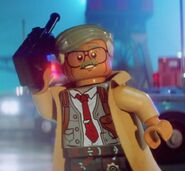 Playable in LEGO Batman: The Videogame