Composite Superman also known as Super Bat is a Super Heroes minifigure who appears in LEGO Batman 3: Beyond Gotham.

Joseph Meach was a custodian of the Superman Museum who was hit by lightning while near a Legion of Super-Heroes display, which gave him the powers of all Legionnaires. Meach used Chameleon Boy's shapeshifting to give himself a half-Superman, half-Batman costume and renamed himself Composite Superman, with the intent of taking over the world.

Composite Superman, along with Cyborg Superman and Solar Suit Superman are unlocked via free play, in the mission "Breaking the Ice". 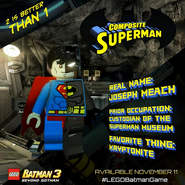