Cornelius Oswald Fudge, Order of Merlin - First Class, (fl. 1981–1997) was the Minister for Magic from 1990 to 1996. He thus had complete control of the Ministry of Magic, the main governing body of the British wizarding world. Fudge began his career in the Ministry as Junior Minister in the Department of Magical Accidents and Catastrophes. He then succeeded Millicent Bagnold as Minister for Magic, and thus had the responsibility of meeting with the Muggle Prime Minister when necessary. In 1993, following attacks on Muggle-borns at Hogwarts School of Witchcraft and Wizardry due to the opening of the Chamber of Secrets, Fudge had Rubeus Hagrid taken to Azkaban so it would look like the Ministry was doing something despite Hagrid's innocence.

In 1993-1994, Cornelius Fudge had to deal with the escape of the prisoner Sirius Black from Azkaban; as Fudge believed Black to be threat to society he had Dementors stationed in Hogwarts and Hogsmeade. However, Black narrowly escaped from Fudge's fingers. During the summer holiday, he organised the Quidditch World Cup and the Triwizard Tournament with Ludo Bagman and Barty Crouch Senior After Cedric Diggory's death in the Tournament and Harry claiming Lord Voldemort had returned, Fudge refused to believe it, because it would mean the end of the world he worked so hard to build. Instead, he used his influence at the Daily Prophet to slander and discredit Harry and Albus Dumbledore, as Fudge was paranoid that Dumbledore was after his job and was simply telling lies. However, following the Battle of the Department of Mysteries, Fudge saw Voldemort with his own eyes and was forced to admit that he was wrong, causing the wizarding community to scream for his resignation. He was replaced as Minister for Magic by Rufus Scrimgeour, but stayed in an advisory capacity and communicated news of the Second Wizarding War to the Muggle Prime Minister if Scrimgeour was unable to. 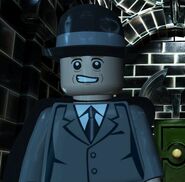 Fudge with his wand 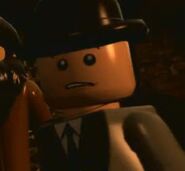