He wears pirate clothing with a light blue bandana, the same as the santa hat. He has white and grey facial hair. His parrot, although yellow and blue in the films, is red and green in the video games, apart from the PS3 version.

Cotton appears in The Curse of the Black Pearl, Dead Man's Chest, and At World's End.

Cotton was a pirate who lived in Tortuga. He had his tongue cut out and a parrot was trained to speak for him.

In The Curse of the Black Pearl, he and his parrot are hired by Joshamee Gibbs and Jack Sparrow as a part of the crew to reclaim the Black Pearl. After Elizabeth Swann frees the crew from the Pearl's brig, he and the crew escape Isla de Muerta with the Pearl. They later rescue Jack from Port Royal, the crew's presence is first hinted when his parrot is seen by Will Turner.

In Dead Man's Chest, Jack Sparrow attempts to shoot his parrot when it exclaims, "walk the plank". Cotton is among the few surviving crew members when they escape the Cannibals of Pelegosto. When the Kraken attacks the Black Pearl, he and his parrot once again are among the surviving crew, and they later agree to go rescue Sparrow.

In At World's End, he joins Sparrow's crew again after he and the Pearl are retrieved from Davy Jones' Locker. When Cutler Beckett's armada arrive at Shipwreck Cove, his parrot flees, saying, "abandon ship, abandon ship". After the Maelstrom his parrot returns to him. He remains a crew member of the Pearl after Hector Barbossa mutinies against Jack a second time.

In On Stranger Tides, the Black Pearl is attacked by the Queen Anne's Revenge. He was either killed in the battle or taken prisoner by Blackbeard.

Cotton with his parrot.

Cotton on the rigging.

Cotton with the crew in Sao Feng's bath house. 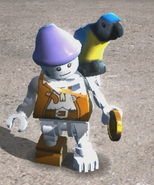 Character Token
Add a photo to this gallery
Retrieved from "https://brickipedia.fandom.com/wiki/Cotton?oldid=1899101"
Community content is available under CC-BY-SA unless otherwise noted.