System cow is a figure similar to the System horse. It is depicted in marching position with posable neck, which can be bent up and down. In the middle of the creature's back there is a space, where a 1x2 brick and a 1x2 plate should be inserted. It can be substituted by a standard horse saddle, hithing or wings assembly, as it is in case of a Sea Cow's ornamental cow figure. On either side of cow's head there is a space where horns (either short or long) can be inserted. Except for the Sea Cow's ornament, which comes with golden horns, the white ones are usually used. By changing the angle of the horns a different look can be achieved - a mild, domesticated appearance or a fierce Wild West one.
Cow can either come in black and white (Holstein) or brown. In both variants the udder has the same colour as the hide and the creature has a light spot on the head. The eyes of the Holstein cow are black dots with white off-centre insides. The design of the brown cow's eyes is more elaborate - a combination of three non-concentric circles. Each eye is a printed white dot inside a larger black spot surrounded by a white with black outline. Even the lashes are marked by a short horizontal line outside the outline. The brown cow has also a light spot on its nose with a couple of black dots resembling nostrils. 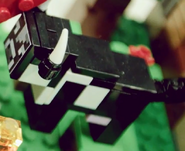 The Minecraft Cow.
Add a photo to this gallery