Crawley is a Legends of Chima minifigure released in 2013.

The reptilian Crawley has a colour of olive green. His hands are black, and his lower jaw is a slightly lighter colour than his head. He has printing on his toes, that of claws; on his upper legs and belt; coloured maroon; and on his torso, muscular printing of the same green as his lower jaw. In the middle of his torso printing, there is a silver brooch with a blue stone in the middle. His eyes are yellow, and he has a long snout like a crocodile, with numerous teeth, and nostril printing on the tip. A few small spikes adorn the top of his head.

Crawley is in the Crocodile tribe, with Cragger and Crominus, and is apparently allied with the Raven tribe and the Wolf tribe, Razcal, Razar, Wakz, Winzar, and others. He drives a Claw Ripper, a vehicle with two huge wheels at the back and treads at the front, as well as a snapping mouth sported on the front. He fights the Eagle, Lion, and Gorilla factions for the light blue Chi crystals.

In Attack of the Ice Clan he and Crug get frozen by the Ice Hunters. Crawley and the other Crocs get captured. Crug tells Longtooth a story when he and Crawley were roasting Marshmallows at Hummingmoss Point.

In the TV show 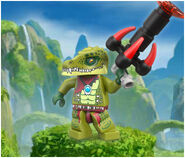 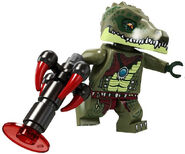