Crazy Scientist's Monster is a Monster Fighters minifigure released in 2012.

The Crazy Scientist's Monster has unprinted brown legs. His torso and arms are also brown, while his hands are olive green. His torso is printed with a brown coat, white buttons, a grey undershirt, and some patches and stitches. His head is olive green, printed with a moaning expression. Atop his head, he wears a part that appears to extend his forehead. Its top is molded with black hair, and it is printed with two safety pins.

The Monster is from the Lab of Uncanny Creations, a secret underground laboratory. He is one of many abominations created by the crazed Scientist to do his bidding (and his chores). 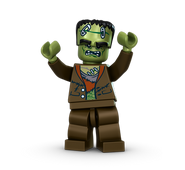