This article is about the Monster Fighters character. For the Minifigures character, see Crazy Scientist (Minifigures).

The Crazy Scientist has unprinted black legs, and a white torso. The torso is printed with several buttons, and a belt holding a beaker and a pair of pliers. The belt continues around his back, with two further test tubes and a clamp wrench. His arms are white, and his hands black. He has a yellow double-sided head. One side features grey and clear goggles, and a determined expression. The other has a crazed expression, and red and grey lenses in his goggles. He has large, rubbery grey hair. 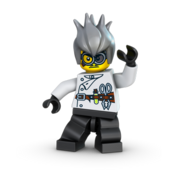 With the Monster Fighters logo

The Crazy Scientist's other face

The scientist compared to his alternate face