"WE ARE NOW TAKING PRE-ORDERSssSS!"
―a Creeper on an advertisement for 21102 Micro World.

A Creeper is a Micro Mob and Minifigure from the Minecraft theme.

The Creeper has a base of a green 1x2 plate with stud offset, made to represent its feet. Its body is made of a single 1x1 green block, as is its head, which is printed with a pixelated screaming expression.

Creepers are mobs (in-game entities) in Minecraft. They wander around the world looking for the player. When it sees a player, a Creeper will emit a hissing noise and begin to chase him. When it gets near enough, it will flare up and then explode. Creepers can spawn anywhere dark enough, even if it's on the surface, and are capable of moving around even in broad daylight. Creepers possess a deathly fear of the feline Ocelot and Cat mobs, and will flee from them on sight, making it a good idea for the player to have a feline with him.

CGI of Creeper and Steve

"Notch" (founder of Minecraft) with a Creeper Micro Mob 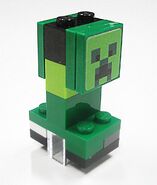 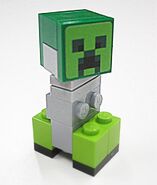 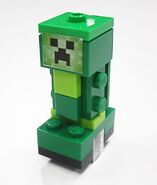 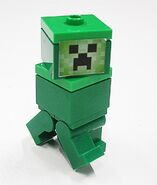 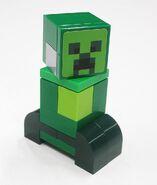 Final minifigure designs of Steve and a Creeper

All the pieces used to make the creeper

A close up of the minifigure scale creeper head