Crooler is a Legends of Chima minifigure released in 2013 exclusively in 70006 Cragger's Command Ship. She is a member of the Crocodile Tribe and the main antagonist. Crooler has a supporting role in the cartoon series based on the theme, Legends of Chima: The Animated Series. She is, in a way, the true main antagonist of the series, as all of Cragger's evil actions are the result of her manipulation.

Crooler is mostly olive green in skin colour, from her jaws to her feet with her hands, upper head, and scales being earth green while her abdomen is light, yellowish green. Her jaw extends forwards like a real crocodile and has similar details pertaining to the head-shape of a crocodile. Crooler has sharp claws on her toes and teeth jutting out of her mouth. Her yellow, reptilian eyes are surrounded by lilac scales.

Crooler wears skimpy and torn, lilac clothing on her waist and chest. Her chest appears to have a bandeau that is torn. A red cloth belt and lilac loincloth extends across her waist and a tail extends down her left leg. A string of pointed teeth is kept to the side of her other leg.

In the way of jewelry, Crooler wears a silver ring on her left nostril, another ring in her navel, a belly button ring, and a necklace extending down from her shoulders, the bottom of which hangs in the center of her chest with a Chi holder. Three, white spikes protrude from it, each from and in a different direction.

Crooler was a princess and one of two twins born to King Crominus of the Crocodile Tribe and his wife, Crunket, her brother being Cragger who was older by only a few seconds.

Crooler's relationship with anyone but Cragger and her parents is unknown, and only slightly. She is insightful on her brother and knows where he is strong, where he falls, and how to control him, whether it be for her personal gain or to degrade him.

Their parents tried to warn Cragger not to trust Crooler as their last words before what seemed to be their demise, which left Cragger as king of the Crocodiles. Crooler used a spray concealed in a flower to control her brother's thoughts and force him to declare war on the Lions for control of the Chi resource.

Crooler was, in a sense, the real leader of the Crocodiles, her brother being a figurehead who she manipulated.

In the episode Laval in Exile, she reveals her true story. Hatched a second before Cragger, she accidentaly pushed Craggers egg and Queen Crunket grabbed Craggers egg and when he hatched, they hugged him. They forgot all about Crooler. She was sad. When they were playing, Cragger fell off a branch. Crooler got the blame.

In the episode Into the Outlands she is released from the dungeon by her mother Crunket, before leaving Cragger says not to listen to a word she says, Crunket replies "You've learned your lesson well".

In A Tangled Web she suggests to Crunket that they use all of the recovered Chi to rule Chima. Crunket says no to the plan because they have to stop their new enemy is too powerful and they have to work with the lions, not against them. Crooler says "Sure of course that's what we tell them"(She winks her eye). She was later captured by Spiders seeking to reclaim the Chi.

In The Legend Thief Crunket sends her down to the dungeon to interrogate the captive Spiders, but instead offers them an alliance. However they broke out of their chains and tied her up.

In This May Sting a Bit when Crominus says that the persuader plants have been nothing but trouble, she says to herself "Oh I wouldn't say that".

In Attack of the Ice Clan she, Cragger and Crug escape the ice tribes.

In Cool and Collected she says to Flinx that the only crocodiles left are her, Crug and Cragger. When the Mammoths prepare to attack, she shields herself behind Plovar.

In The King Thing, when Cragger holds a bird that reminds him of Plovar, she says "I'm sure that toothpicking bird is as useless as ever.".

In The Heart of Cavora, after the Great Illumination she lets Plovar clean her teeth, perhaps showing that she is no longer evil due to the Illumination. 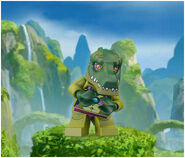 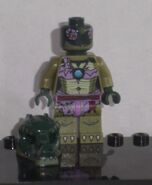 Head
Add a photo to this gallery

Retrieved from "https://brickipedia.fandom.com/wiki/Crooler?oldid=1724871"
Community content is available under CC-BY-SA unless otherwise noted.
... more about "Crooler"
RDF feed
Appearances
70006 Cragger's Command Ship +
ArticleRating
2 +
Image
Crooler-1.jpg +
InfoboxTemplate
Minifigure +
ShopDescription
Crooler Hatched just seconds after … Crooler</br></br>Hatched just seconds after Cragger, Crooler is the Crocodile Prince’s ambitious and conniving twin sister. She is constantly goading her brother on and forcing him to take all the risks, while she seeks to enjoy the rewards of his success or mock him relentlessly when he fails. Some creatures see her as the REAL authority in the Crocodile Tribe, which is fine with her. She’s happy to have the power, without any of the annoying trivialities and decision-making of official leadership. She doesn’t exactly want to overthrow Cragger as much as she wants to manipulate him for her own benefits. She is very good at pushing his buttons and pulling his strings. She knows all his weaknesses and insecurities, and constantly plays on them in order to accomplish her own goals and self-aggrandizement. She is truly the most cruel of all the Crocodiles.ruly the most cruel of all the Crocodiles. +
Theme
Legends of Chima +
Title
Crooler +
Years
2013 +