Crosshair is a Star Wars minifigure that was released in 2021.

CT-9904 "Crosshair" was a male defective clone of bounty hunter Jango Fett. However, Crosshair's defects proved to be effective for military purposes, resulting in him being considered an enhanced clone. As a result, he and several other clones with desirable mutations were formed into a clone commando squad known as Clone Force 99, but they informally called themselves "the Bad Batch." Working together and normally not working with regular clone troopers, Crosshair and his squadmates secured an hundred percent success rate. According to fellow Bad Batch member "Wrecker," the squad would always be shot down if they worked with regular troopers. At some point, Crosshair and his squad met Cut Lawquane and his family on Saleucami.

During the Battle of Anaxes, CT-9904 "Crosshair" was deployed alongside the rest of his squad, Clone Force 99, as special reinforcements under Jedi General Anakin Skywalker. Deployed to a Cyber Center, the squad set out to retrieve special intelligence that could turn the tide of the battle. On the way to the center, Clone Marshal Commander CC-2224 "Cody" was injured; when Clone Captain CT-7567 "Rex" attempted to take command, Crosshair met with protest alongside Wrecker, subsiding when Clone Sergeant "Hunter" officially ceded command to Rex. Upon reaching the cyber center, Crosshair was left outside to secure the perimeter. After the squad retrieved information revealing that CT-1409 "Echo," who had presumably perished on Lola Sayu, was in fact alive on Skako Minor, Crosshair secured a shuttle and transported his squad back to the base.

Crosshair, with the rest of Clone Force 99 as well as Rex and Skywalker, went to Skako Minor in hopes of retrieving Echo from the Techno Union city of Purkoll on the planet. Upon landing, the group were attacked by keeradaks; Crosshair shot a grapple into a keeradak that had began carrying Skywalker away, allowing Hunter to hold on and give pursuit. After the keeradak escaped with Skywalker, Crosshair and his squad rendezvoused with Hunter at the edge of a Poletec village. After a brief skirmish, the clones and the Poletecs came to an immediate ceasefire, and the chief, Qin Yazal, agreed to assist the clones and Skywalker in reaching the Techno Union facility.

Upon arriving at the Purkoll Tower Base, Crosshair remarked that it could be a trap, and that he would have willingly just left Echo for dead due to his status as a "reg." Rex, angered assaulted Crosshair, but the fight was broken up by Skywalker. As the group made their way through the base, Crosshair assisted in clearing a large group of D1-series aerial battle droids, before continuing on. With the assistance of Skywalker, Crosshair dispatched another group of droids that had almost cornered the Jedi General.

As Rex and Tech located Echo, Crosshair, Skywalker, and the other members of Clone Force 99 continued to fight the aerial battle droids that were closing in on them. After Echo was freed, the clones and Skywalker began their escape, unable to call for reinforcements due to the unsanctioned nature of their mission. Echo opened a vent, which Wrecker and Skywalker helped the group into before the facility was blown up by Wrecker. Skywalker and the clones continued moving through the vents before finding themselves outside on top of a pipe. Crosshair momentarily lost his footing, but was saved by Wrecker. The group then leaped onto a flock of keeradaks flying under the pipe, and made it back to the Poletec village.

After returning to the village, Crosshair spotted a group of D-wing battle droids that had followed them. He managed to take all but one out; the escaping droid then reported the clones' location to Wat Tambor. After the droid's escape, the clones briefly argue with the Poletecs, before convincing them to help them defend the village. Crosshair and his team helped to defend the village from a legion of D-wing battle droids, as well as two octuptarra tri-droids. After ending the threat of the droids, Crosshair and his team boarded the Havoc Marauder to return to Anaxes.

During the conquest of Kaller, Clone Force 99 was led to an ongoing skirmish by Padawan Caleb Dume. As the rest of his squad fought in the battlefield below, Crosshair remained on a higher point, taking out enemy droids from above. When the operation was complete, Crosshair slid down from the hill, rejoining his squad as they approached Dume, his master Jedi General Depa Billaba, and Clone Captain CC-10/994 "Grey." Under Billaba's orders, Crosshair prepared to accompany his squad and Dume to another ongoing skirmish where they were needed. However, their new mission was cut unexpectedly short when Captain Grey and a squad of clones, under the influence of Order 66, opened fire on Billaba.

As Dume ran to help Billaba, Crosshair and his squad gave chase. When Dume escaped the skirmish, a confused Hunter ordered Crosshair to accompany him in locating the Padawan. While in the nearby forest, tracking Dume, Crosshair spotted the Padawan looking at them from a tree above. Adhering to his programming, Crosshair opened fire on Dume, who thinly escaped. Hunter, who was seemingly unaffected by the activation of Order 66, yelled at Crosshair for opening fire, telling him that they needed more information. When Crosshair again spotted Dume, he fired once more, much to the protest of Hunter. When the two gave chase and Hunter allowed Dume to escape, Crosshair inquired as to the Padawan's fate. Hunter merely informed Crosshair that Dume was stunned over the ravine, and fell to his death, though Crosshair did not believe his sergeant.

Upon returning to Kamino, Crosshair berated Hunter for refusing to execute Order 66, surprising his teammates who pointed out that Crosshair had shared their disregard for command in prior missions. After returning to their bunks, all clones on Kamino were directed to attend an announcement regarding the Republic's status. During the assembly, Crosshair watched as the newly anointed Emperor Palpatine declared the formation of the Galactic Empire. After the announcement, Crosshair and his squad met Omega, a female, genetically altered clone who was familiar with their identities. After Omega left, Crosshair and his team came to the mess hall to eat. After Omega sat to eat with them, to Crosshair's annoyance, a group of normal clone troopers walked by, insulting Clone Force 99. As Omega and Wrecker retaliated, prompting a fight to break out, Crosshair attempted to continue eating. However, he joined the fight when Echo was thrown onto the table, and as a result, Crosshair's food.

Expecting punishment on their way to speak to the Prime Minister, Lama Su, Crosshair and his team were warned by Echo that Admiral Wilhuff Tarkin was present on Kamino. Before reaching the Prime Minister, the squad was redirected to the training facility, where Tarkin wished to assess their combat capabilities after witnessing their fight in the cafeteria. During the initial training exercise, Crosshair assisted by taking out each of the turrets, before sniping enemy combatants from one of the towers. When Tarkin ordered a second exercise to be performed using live rounds, Crosshair took cover at ground level, and attempted to aid his squad in the exercise. When only one training droid remained, Crosshair instructed Hunter to throw his knife into the air; Crosshair shot the knife, causing it to stab the remaining droid in the head.

At some point, Crosshair had filed a report against his teammates, stating their failure to faithfully execute Order 66. Taking note of this report, Tarkin decided to assign Clone Force 99 with a new mission to test their loyalty. Crosshair, alongside his squad, travelled to Onderon, believing that they were assigned to eliminate a group of insurgents supporting the Separatists. Upon realizing that the group they were assigned to eliminate consisted primarily of civilians, Crosshair was still prepared to carry out his orders, unlike the rest of his squad. Hunter ordered Crosshair to stand down, to which Crosshair responded with resistance. However, the group as a whole was apprehended by Saw Gerrera, who was leading the group of civilians in hopes of finding them safety.

While Gerrera spoke to Clone Force 99 about the truth of the Empire's new order, Crosshair remained defiant to his claims, insisting that the mission be completed in full. He also remained hostile to Gerrera as a result. After the clones were released and Gerrera left, Crosshair insisted that they finish the mission, but was prevented from doing so by the rest of his squad. The group then departed to return to Kamino, hoping to retrieve Omega before she could be harmed.

Upon returning to Kamino, Crosshair and his teammates were immediately apprehended and placed in the brig, alongside Omega. Crosshair became frustrated with Hunter, blaming him for the situation they were in due to his unwillingness to follow orders. When the argument subsided, Omega approached Crosshair, attempting to console him and convince him not to turn on his brothers, stating that his urges were not his fault. However, Crosshair was soon removed from the cell and taken to the medical bay, as Tarkin had noticed Crosshair's continued loyalty to the Empire in contrast to his teammates. Crosshair's inhibitor chip, significantly less mutated than those of his teammates, was then altered under Tarkin's orders, further amplifying Crosshair's loyalty to the Empire over his loyalty to his team.

Crosshair, now outfitted in new armor, was then deployed to the hangar, where he confronted his former teammates who were attempting to escape with Omega. After Hunter briefly tried to reason with Crosshair, Crosshair opened fire, forcing the squad into cover. As Clone Force 99 attempted to make their escape, Crosshair shot Wrecker, briefly incapacitating him. Before Crosshair could further harm the other members of the squad, however, his rifle was shot out of his hands by Omega. Crosshair attempted to continue fire utilizing a pistol, but was unable to prevent the escape of his former squad mates.

After Crosshair's defection and Clone Force 99's escape from Kamino, the squad once again visited Cut Lawquane on Saleucami. Lawquane inquired as to why Crosshair was not present with his squad. 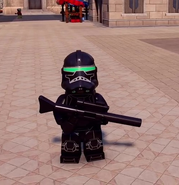