Brickipedia
Register
Don't have an account?
Sign In
Advertisement
in: Class 4 articles, Castle (2007) Minifigures, Minifigures introduced in 2007,
and 5 more
English

"To arms! To arms! For King and Kingdom, let no enemies get past our defenses!"
―Crown Knight

Crown Knights or Knights are members of the Crown King's army. Their role is to defend the kingdom from attacks from enemies like the trolls, skeletons and enemy dragons. They are either foot soldiers or horsemen. Knights on horseback usually use swords and spears, while foot soldiers use bows, crossbows, maces, halberds and swords among other weapons.

A Crown Horse is a horse that is selected to be used by high ranking Knights. Crown horses are usually equipped with metal armor and other accessories. The horses appear in many of the knight sets during 2007, early 2008, and once in 2009.

All the knights are adorned in gray armor, with insignia on their chest armor. Each knight wields a sword as well.

In the Set 5615 The Knight, you see a Knight with Crown Knight armor on an armor rack, The only difference is that the crown knight breastplate has no printing on it. 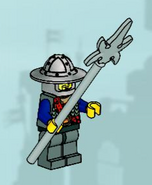 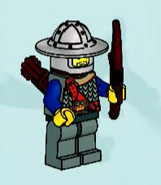 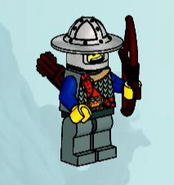 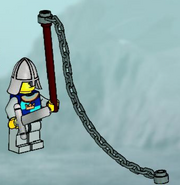 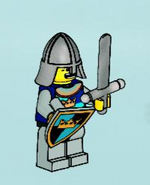 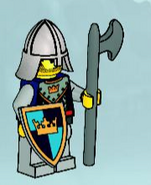 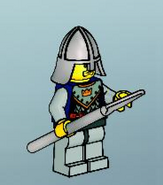 A Crown Knight grabbing a sword in LEGO Universe. 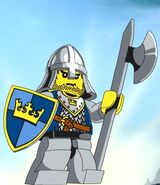