"If a brave and handsome knight doesn’t get here to rescue me soon, I’m escaping on my own!"
―Crown Princess

The Crown Princess, named Princess Alyssa,[1] is the daughter of the Crown King from Castle (2007) theme. She appears in three sets.

The princess has long brown hair that flows behind her shoulders. It is braided in a horizontal ring around the back of her head, but they merge to a single, vertical one. Her face has red lips, two eyes with eyelashes, and two brown eyebrows. Her face is double-sided with two expressions: contented and scared. She wears a blue dress with golden embroidery and has a necklace. Rather than a normal leg piece, her "skirt" is a decorated slope.Its also worth noting that she looks like The Queen from the game LEGO Battles with her Blue Dress,but She doesn't come with a sword or Crown meaning she is less likely to be The Queen.

The Crown Princess is the daughter of the Crown King. She was kidnapped by the Evil Wizard's Skeleton Warriors and locked up in the Skeleton Tower. Her father promised a chest full of gold and her hand in marriage for the knight who could rescue her. 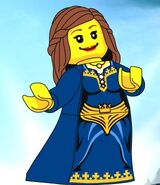